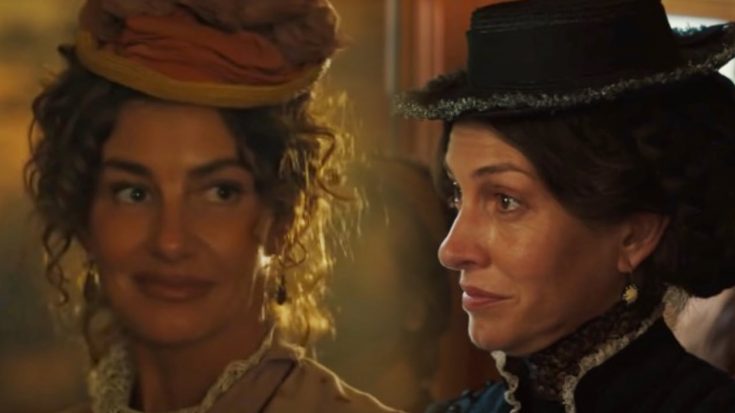 WARNING: Spoilers below for the first two episodes of 1883.

1883, the new Yellowstone prequel series, debuted on December 19. The series follows the ancestors of Yellowstone’s John Dutton as they journey from Texas to their eventual home in Montana.

Another member of the Dutton family was played by actress Dawn Olivieri. She played James’ sister Claire, who was newly widowed when we met her in the show.

Claire and her daughter Mary Abel (played by Emma Malouff) joined James and his family on their journey. Both Claire and Mary Abel were a bit pretentious, and often butted heads with the other members of their family.

Margaret and Claire did not get along. Still, Margaret jumped in to defend Claire and the other members of the camp after they were attacked by a group of men.

Sadly, Mary Abel was killed in the scuffle, which devastated Claire. Mary Abel was her last surviving child, so after she died, Claire no longer had any will to live.

The Duttons left Claire at Mary Abel’s graveside as the wagon party moved forward. But Margaret convinced James to go back for his sister. Just as James arrived back at the old camp, he watched Claire take her own life.

James and the party’s leader Shea Brennan (played by Sam Elliott) buried Claire next to Mary Abel before they continued on their way.

Even though Margaret and Claire were not the best of friends in 1883, Faith and Dawn have nothing but kind words to say about each other in real life.

On the night of 1883‘s premiere, Dawn shared a photo of her and Faith in character and wrote, “I will always have Faith…“

“…may I introduce you to the brilliant actor, Dawn Olivieri…There are no words to describe Dawn’s performance in this show. Episode 2…..mind is blown. Still…..speechless Love you, Dawn!!!!!!“

Look below to read everything Faith had to say about Dawn. What did y’all think of her character in 1883?