7 Facts About ‘O Brother, Where Art Thou?’ 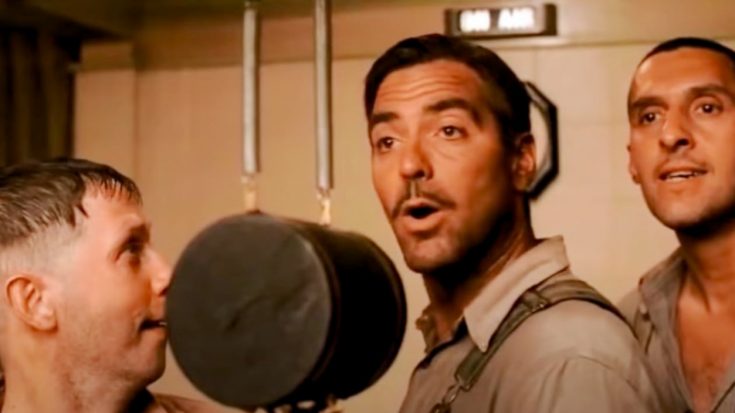 Country music is at the core of the 2000 hit film O Brother, Where Art Thou? Set during the Great Depression, the film features an abundance of bluegrass, folk, and country music from that time period.

Anyone who has seen the film also knows that country music plays a large part in the plot itself. When the main characters escape from prison, they somehow end up in a recording studio where they record a song as The Soggy Bottom Boys. That song, called “Man of Constant Sorrow,” goes on to become a big hit, much to the surprise of the escaped convicts.

The soundtrack to O Brother, Where Art Thou? was comprised of traditional material, particularly the work of bluegrass singer Ralph Stanley. Other iconic singers such as Emmylou Harris and Alison Krauss were also featured on the soundtrack. With so many talented artists working together, the soundtrack was a huge hit. The artists were recognized for their hard work during the 2002 Grammy Awards, when the soundtrack received the award for Album of the Year.

We’re sure you know all of the songs from O Brother, Where Art Thou? by heart. But there’s a lot more to the film than you probably ever realized. We’ve gathered up seven fun facts about the movie that few people know. Go ahead and click the button below to learn what they are!

1. It Is Based On An Epic Poem

According to J.D. Lafrance, who wrote in his article titled The Coen Brothers FAQ, O Brother, Where Art Thou? was inspired by a much older tale…Homer’s epic poem the Odyssey. This connection can be seen in the name of main character Ulysses “Everett” McGill (George Clooney).

In Greek, the main character in Homer’s Odyssey is named Odysseus, while Roman versions of the tale refer to him as Ulysses. But the similarities between Everett and Ulysses don’t stop at their names.

In the Odyssey, Ulysses goes on a long journey to return home to his wife, Penelope. All the while, Penelope has to fight off suitors seeking her hand in marriage, who assume Ulysses has died. Like Ulysses, Everett’s main quest in O Brother, Where Art Thou? is to return to his wife Penny (a play off of Penelope) before she marries another man. Bet y’all never made that connection before!

2. George Clooney’s Uncle Helped Him With His Role

Writer, director, and producer of O Brother, Where Art Thou? Joel Coen knew he wanted to offer the lead role in the film to Clooney. In a 2000 interview, Coen revealed that Clooney agreed to star in the film without reading a single word of the script.

But once Clooney started reading the script, he had a tough time understanding his character. That’s when he decided to call on his uncle to help him out. Clooney sent the script to his Uncle Jack, who lived in Kentucky, and had him read and record the entire thing.

Clooney recalled in an interview that he eventually got rid of the script and relied entirely off of his Uncle Jack’s recording. It was only after they had been filming for two months that Coen and his brother, Ethan, realized that Clooney skipped every swear word they wrote in the script. Turns out, Clooney’s Uncle Jack, who was a devout Baptist, censored all of the swear words in his recoding! Bet they all got a good chuckle out of that!

3. One Of The Lead Actors Actually Sang In The Film

While the main characters formed the group The Soggy Bottom Boys in the film, the lead actors did not actually sing their parts on “Man of Constant Sorrow.” This is well-known, since the filmmakers never tried to hide the fact that the actors lip-synced in those scenes.

“Man of Constant Sorrow” was actually performed by Dan Tyminski, Harley Allen, and Pat Enright. The trio went on to win a Grammy for Best Country Collaboration with Vocals for their performance.

Although none of the lead actors sing on “Man of Constant Sorrow,” Tim Blake Nelson, who played Delmar O’Donnell, actually performed his own vocals on the song “In the Jailhouse Now.” Did you ever notice that before?

4. There Was A Snake Catcher On The Set

Since the movie was filmed in the South, everyone on set had to be on high alert for any sort of creepy crawlies. According to Joel Coen, they actually had a snake catcher on set!

However, we’re not sure how professional this said “snake catcher” was. Although the Coen brothers hired him for the sole purpose of catching snakes, he had an unusual way of doing so. “He came to set with a golf club and what he would do is he would look around for snakes,” Coen said. “If he saw one he would rope it with the golf club and put it in this bag. I asked him what you called somebody with this profession, and he said, ‘An idiot.’”

Hey, it’s a tough job, but someone’s got to do it!

Anyone who has seen O Brother, Where Art Thou? knows all about the role that the Dapper Dan pomade plays in the film. A pomade is a special hair-styling product, which when applied to hair, gives it a sleek, shiny look.

According to the movie’s IMDb page, interest in Dapper Dan and another pomade, called FOP, skyrocketed following its release. The popularity of the products led to the creation of a UK grooming product company in 2011, which calls itself the Dapper Dan Company. You can also buy Dapper Dan pomade online on various sites. Now you can style your hair just like Everett did in the film!

6. The Film Was Excessively Tinted

The Coen brothers wanted a specific look for O Brother, Where Art Thou? which they were unable to get on the set. Cinematographer Roger Deakins said that the brothers were going for “a dry, dusty Delta look with golden sunsets. They wanted it to look like an old hand-tinted picture.”

But the set was much greener than the brothers wanted, so the entire film had to be tinted to achieve their desired look. CGI Society wrote that as a result, O Brother, Where Art Thou? became one of the first films to use digital color correction extensively. This process gave the film it’s sepia-colored tone that it’s recognized for today.

While the film’s soundtrack is mostly comprised of modern recordings of traditional songs, there are a few vintage tracks on the record. One such piece is the song “Po’ Lazarus,” which was a recording of real-life prisoners singing at Parchman Farm prison in 1959.

Somehow, the Coen brothers managed to find one of the prisoners that sang on that recording. The ended up paying him $20,000 for allowing them to use his voice for the film. Sounds like a good deal to us!

Everyone involved with the film and its soundtrack ended up striking a good deal. The stories and songs of O Brother, Where Art Thou? have found their place in country music history, and they are here to stay.

Which of these seven facts about O Brother, Where Art Thou? surprised you the most?