Every Night, Fear Tackles Brad Paisley When He Thinks Of This One Thing… 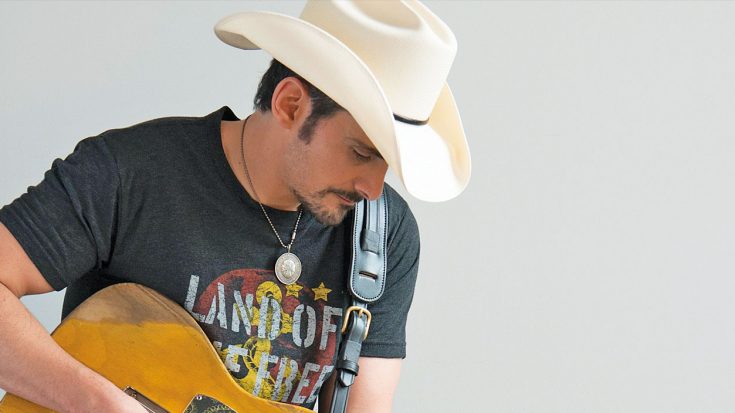 It didn’t take long at all for Brad Paisley to establish a strong following. His debut single, “Who Needs Pictures,” ranked at the 12th spot on the Billboard Country Airplay chart, and his first-ever number one came with his next single, “He Didn’t Have to Be.”

Paisley now has 32 Top Ten singles, 19 number one hits, a CMA Entertainer of the Year win, and three Grammy Awards to his name. That’s just a short list of his many accomplishments.

As his Entertainer of the Year Award win indicates, Paisley has been one of the leading entertainers in country music for years. His headlining tours are consistently championed as some of the best from any artist in country music.

Although thousands of fans pile in to any venue that Paisley books, he still has his doubts. During an interview with CMT on Saturday (February 24), he fessed up to an ugly fear he always thinks of before he heads out on stage.

“The one moment every night that gets to me is the walk to the stage,” Paisley said.

So what is it that gets to him? After being around for nearly two decades now, Paisley admitted he often questions if his fans are tired of him:

“It feels like I have done that walk a lot. I’m not tired of it at all, it’s just that somewhere in the back of my mind, there’s always a little bit of the thought, ‘Are they going to be tired of me tonight?’ Just a little bit. That’s on my mind.“

Of course, all of that fear washes away as soon as Paisley feels the excitement of the crowd. “But immediately when we start, I realize that these people aren’t tired of me because they haven’t heard me for a year or two,” he said.

When you watch Paisley’s concert performances like the one below, it’s clear that people aren’t tired of him at all. In fact, they’re just as excited to see him perform as ever. He’s got nothing to worry about!