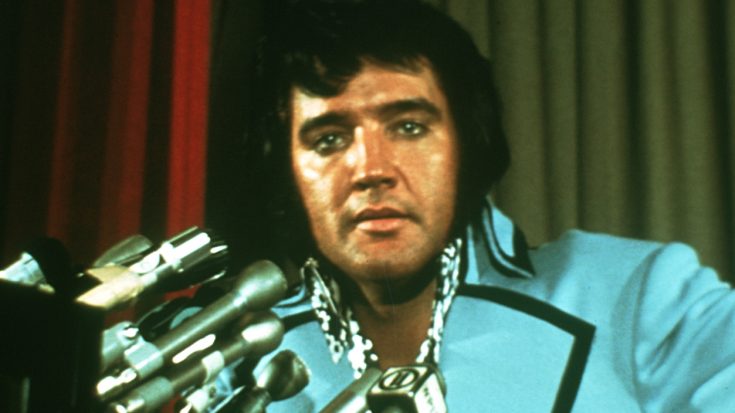 Elvis Presley was a one-of-a-kind performer that brought in an entirely new era of music and entertainment to the world. For decades, he was the cutting edge of music, movies, and stage shows. Unfortunately, that all took its toll on him and he battled his own demons – one, in particular, being addiction.

Elvis passed away tragically on August, 16th, 1977 after suffering from a heart attack at his expansive Graceland mansion in Memphis, Tennessee. His history of battling drug use and painkiller addiction contributed to his death.

In the weeks leading up to his passing, Elvis had been preparing for another tour and was scheduled to fly out of Memphis on August 16th – but that tour would never happen.

Next Thursday marks 41 years since we lost the King of Rock n' Roll, Elvis Presley.

Since his death in 1977, fans have flocked to Graceland for an "Elvis Week" celebration: https://t.co/GPohc3rUlV pic.twitter.com/dxXdMugvit

Just days before his death, Elvis’ step-brother David Stanley explained the chilling warning that Elvis had given him – something he thought odd at the time.

“The last time I saw Elvis alive was two days before he passed away,” Stanley told Australia’s Today Show. “I walked into his room and he was reading his Bible. He said ‘David, let me ask you a question, who am I’? I laughed at him and said ‘well you’re the king’, and he said ‘no there’s only one king’ as he held up his Bible.”

Words written by Elvis Presley in a Bible belonging to him… pic.twitter.com/iyN7jMmpHq

It was then that Stanley told his beloved step-brother he was headed out of town but would be back in time for his tour that was starting. What Elvis said next to him is something he will never forget…

“…And he said ‘I just want you to know that I love you David, I won’t ever see you again – the next time I see you will be in a higher place in a different plane’.”

Glancing at the spiritual books Elvis was reading, Stanley chalked it up to something of a similarly-spiritual meaning at the time. “Unfortunately two days later I was in his bathroom and discovered his lifeless body,” he added.

What do you think of Elvis’ warning? Watch David Stanley’s full interview below and tell us your thoughts in the comments.

Elvis Presley's stepbrothers open up about the life and tragic death of The King of Rock and Roll. #9Today pic.twitter.com/ctN5ZZMnTw