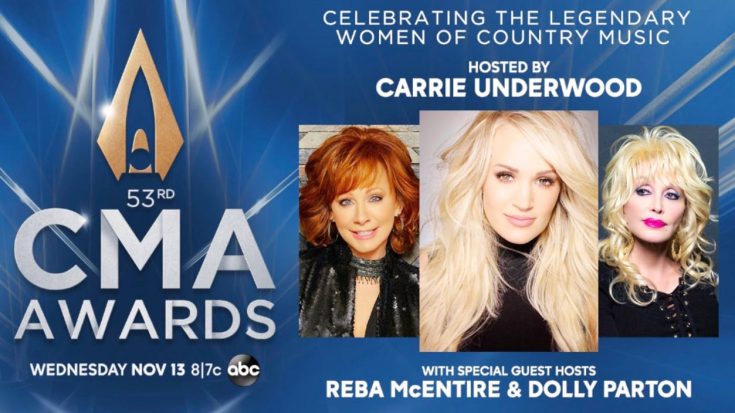 Since 2008, country music fans have always been able to count on two people to entertain them during the annual CMA Awards…Brad Paisley and Carrie Underwood. The two superstar singers worked as a perfect team on the show, and entertained fans with their hilarious banter and comical parody songs.

From playing with Tim McGraw and Faith Hill dolls on stage, to “accidentally” revealing the genders of Underwood’s two sons, the duo created many comical moments that fans are sure to remember for years.

IT'S A BOY! Hosts @carrieunderwood and @BradPaisley open up the 2018 @CountryMusic awards with a baby gender reveal! Congrats Carrie! #CMAawards #BradBlewIt #GaryBlewIt pic.twitter.com/zJ2EWSA98c

Since Underwood and Paisley have hosted the awards together for 11 years, fans assumed they’d return to host again for the 2019 ceremony. And while it has been announced that Underwood is returning for her 12th year as host, she will be hosting the event for the first time without Paisley by her side.

On Monday (August 19), the CMA announced that Underwood will be hosting the 2019 CMA Awards, which are scheduled for November 13. But even though Paisley will not return as her co-host, Underwood will not be left to handle her hosting duties alone.

The CMA also announced that Underwood will be joined by two legendary guest co-hosts throughout the night….Reba McEntire and Dolly Parton.

Both McEntire and Parton have previous awards show hosting experience. In fact, McEntire has hosted the ACM Awards for the past two years, and also served as a two-year host of the CMA Country Christmas special.

The CMA explained that this year’s awards will be all about celebrating the females of country music. So it makes sense why they’d want to enlist two of the genre’s most iconic female stars to host with one of its modern female superstars.

Let’s go girls! I’m so excited to be joining @carrieunderwood and @reba to celebrate the legendary women of country music as a guest host of this year’s #CMAawards on November 13 ? pic.twitter.com/XzR3Ah65vT

While we’re sad to see Paisley go, we’re excited to see what kind of memorable moments Underwood, Parton, and McEntire will be able to create as the hosts of the 2019 CMA Awards.

Who knows, maybe since this year’s awards is all about honoring women, this arrangement may just be a temporary thing and Paisley could return next year? If so, we can count on even more hysterical exchanged between him and Underwood!

Relive some of the duo’s best moments as CMA Awards hosts by tuning in to the video below.