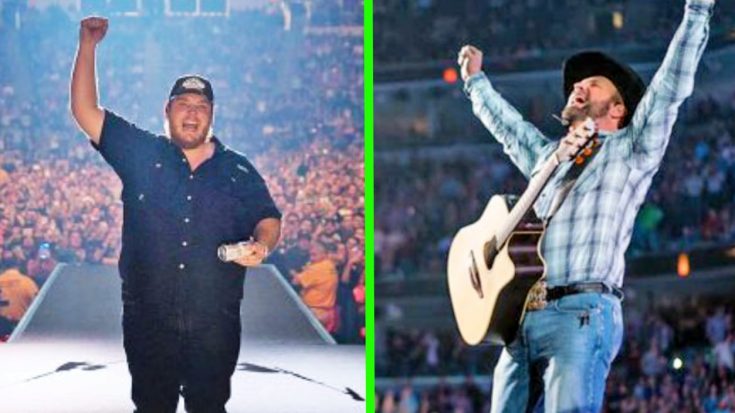 If you asked 100 fans to name the hottest artist in country music right now, most of them would likely say it’s Luke Combs.

It’s a no-brainer why that would be their answer. The powerhouse singer is dominating all aspects of the genre right now, and has managed to accomplish so much since his radio debut with his first single, “Hurricane,” in 2016.

Since then, Combs has won numerous awards (including the New Artist of the Year Award at the 2018 CMA Awards), has seen five of his six singles top the charts (and his sixth single is well on its way there), has performed to many sold-out crowds, and has been inducted into the Grand Ole Opry.

Combs’ Opry induction just happened on Tuesday (July 16). He posted about the special day on social media, writing, “I mean to me, this (being inducted into the Grand Ole @Opry) is the No. 1 thing.”

As far as career achievements go, I mean to me, this (being inducted into the Grand Ole @Opry) is the No. 1 thing. When I moved here (Nashville), all I knew is that if I could pay my rent and have enough food to eat doing music, then that to me was my definition of “I’ve made it.” I’m the proof that you can do anything that you set your mind to. It’s the relationships with people and the way you foster them that lead to things like this happening. And if I didn’t have a great team, and I didn’t have a great family, and I didn’t have great friends and a great fiancé then I wouldn’t be standing up here today; so I think that would be my biggest takeaway is that you can do anything as long as you have the right people there to help you achieve your goals. This is just… an institution and to me, it’s beyond country music; it is country music. Definitely will and always forever be the No. 1 career achievement for me over winning this or winning that or going to this or selling out that. This is the thing that nobody can ever take away from me, which I think is what I’m so proud of. Video: @zackmassey

Now, just days after his Opry induction, Combs has another accomplishment to celebrate.

Earlier, we mentioned how Combs’ singles have consistently topped the country charts. But we didn’t mention his album, This One’s for You, which has been a huge success as well.

Since its release in June 2017, This One’s for You has dominated the Billboard Top Country Albums chart. The album has remained on the chart since its release, even if it hasn’t always held the top spot.

But it has been at the top of the chart more often than not. In fact, the album has secured the chart’s top listing for a whopping total of 41 weeks, according to a report published by Billboard on July 17.

Moves on the @billboardcharts: @LukeCombs' 'This One's For You' ties @garthbrooks' 'No Fences' for third-longest No. 1 run on #TopCountryAlbums chart https://t.co/sLxG2vQp0U pic.twitter.com/eUXV0cySxE

This is a remarkable achievement for Combs, since in reaching this milestone he is now tied for a major record held by Garth Brooks.

Now, both Combs and Brooks hold the record for the third-longest number one run on the Top Country Albums chart. Brooks’ iconic 1990 album No Fences, which contained songs such as “The Thunder Rolls” and “Friends in Low Places,” was the previous sole record holder.

Only time will tell if This One’s for You will remain tied with No Fences, or if it will move on to become the #2 or #1 record holder. Those positions are currently held by Randy Travis‘ Always & Forever and Shania Twain‘s Come On Over, which spent 43 and 50 weeks in the chart’s top spot, respectively.

Based on how things have been going for Combs, his chances of taking that #2 or #1 record-holding spot look pretty good. His chances of scoring another hit single also look pretty good, since his newest track, “Beer Never Broke My Heart,” is blowing up right now. Be sure to give it a listen below.

A huge congratulations to Combs on all he has accomplished!