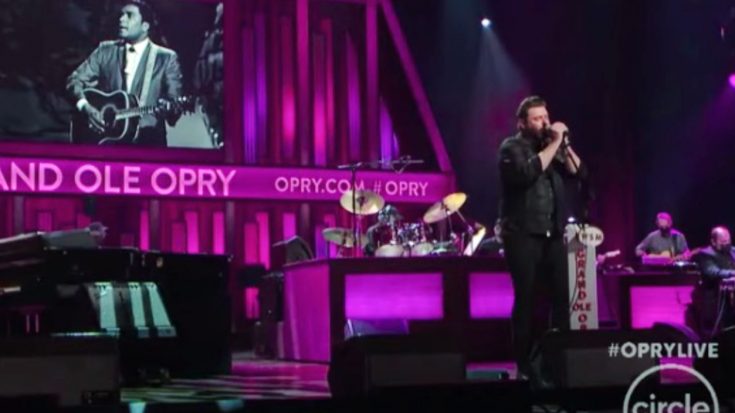 On December 12, 2020, Grand Ole Opry member and country music legend Charley Pride passed away at the age of 86.

His team released a statement about his death on his official Facebook page:

“It is with great sadness that we confirm that Charley Pride passed away this morning, Saturday, December 12, 2020, in Dallas, Texas of complications from Covid-19 at age 86,” the statement read.

As news broke about Pride’s death, the Opry was preparing to host its Saturday evening show.

The Opry placed a white ribbon on Pride’s name placard and shared the picture on social media, simply captioning it with an emoji heart. They also announced that the night’s show would be dedicated to him.

Scotty McCreery performed his emotional #1 song “Five More Minutes” and dedicated it to Pride, while Dennis Quaid (making his Opry debut) sang his song “On My Way To Heaven” in Pride’s honor.

But it was Opry member Chris Young who took it upon himself to close the night’s show by covering one of Pride’s songs. He chose his signature tune, “Kiss an Angel Good Mornin’.”

We lost a member of the greatest family in country music tonight…from the circle to heaven – this one is for you Charley. @opry pic.twitter.com/apqA0gcRO5

“Sadly today we learned of the passing of a true country icon, Mr. Charley Pride,” Young said before his performance. “Country music has truly lost a legend, and we’d like to honor him with one of his songs tonight.”

Young’s voice broke as he spoke. It was obvious he was trying to control his emotions so he could sing “Kiss An Angel Good Mornin’.” He managed to keep his voice steady as he sang, but whenever the camera moved close you could see the tears in his eyes.

You can watch Young’s touching tribute to Pride by tuning in to the video below.

As Young’s performance shows, Pride’s music left a lasting impact on country music, and he will forever be remembered.