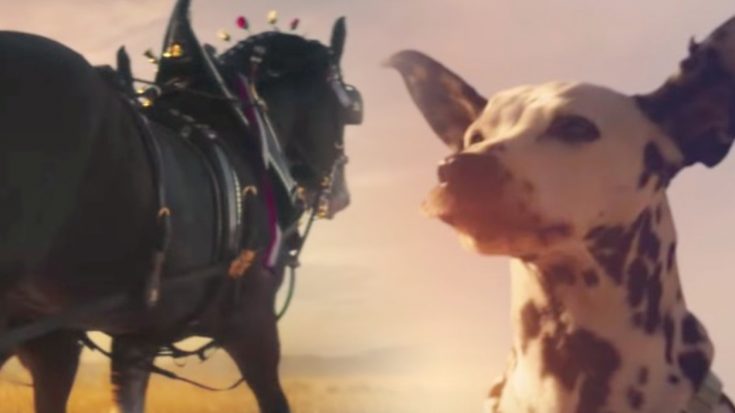 Every year, companies shell out millions for mere seconds of airtime during America’s biggest sporting event of the year…the Super Bowl.

Even those who don’t care about sports often tune in to the Super Bowl solely to see the commercials.

Super Bowl Commercials. That is all pic.twitter.com/wKKbe5PZ5L

Many famous clips have emerged from past years, with some tugging at your heartstrings and others tickling your funny bone.

One brand who has always dominated the Super Bowl ad game is Budweiser. Each year, the beer brand’s Super Bowl commercials are hailed as some of the best, whether they take on a serious or more lighthearted tone.

The ads often star the famous Budweiser Clydesdales, which were first introduced to the public way back in 1933.

In 2019, the Clydesdales returned in one of Budweiser’s eight commercials for Super Bowl LIII.

According to The Atlanta Journal-Constitution, Budweiser’s parent company Anheuser-Busch purchased five and a half minutes of commercial airtime during the big game, with every 30 seconds estimated to cost at least $5 million.

But one of those ads, starring the Clydesdales, was released in advance. It was first teased with a short video released by the company.

The full commercial made its debut days before the big game, and was created to celebrate the company’s initiative to utilize wind power for brewing its products.

The Perfect Song To Back A Message

The brand picked the perfect tune to accompany the ad…Bob Dylan‘s legendary song from 1963, “Blowin’ in the Wind.”

Decades after its release, the song was selected by the Grammy Hall of Fame for induction, an honor that has only been bestowed on a select number of songs. As if that wasn’t enough proof of the song’s lasting legacy, it was also named as the 14th greatest song of all time by Rolling Stone.

While Dylan wrote “Blowin’ in the Wind” to address much more complex issues than the blowing of a gentle breeze, the song still serves as a brilliant accompaniment to Budweiser’s wind-themed ad.

In addition to marking the return of the Clydesdales, the commercial also stars the equines’ best canine pal, a Dalmatian. This gal is named April, and she appears in the opening shot of the video, looking a bit perplexed as the wind blows her ears straight up.

Slowly, the camera pans to show that April is sitting on top of the Clydesdales’ wagon. The powerful horses are seen galloping through a field filled with what is assumed to be barley.

As the camera pans further away, windmills begin to emerge in the sunlit landscape. The advertisement ends with the messages, “Wind never felt better” and “Now brewed with wind power.”

According to USA Today, the commercial you saw during the Super Bowl was trimmed to last for only 45 seconds. So if you want to see the clip in full, you need to tune in below.

Isn’t it beautiful? Leave it to Budweiser to create yet another ad that gives us goosebumps!