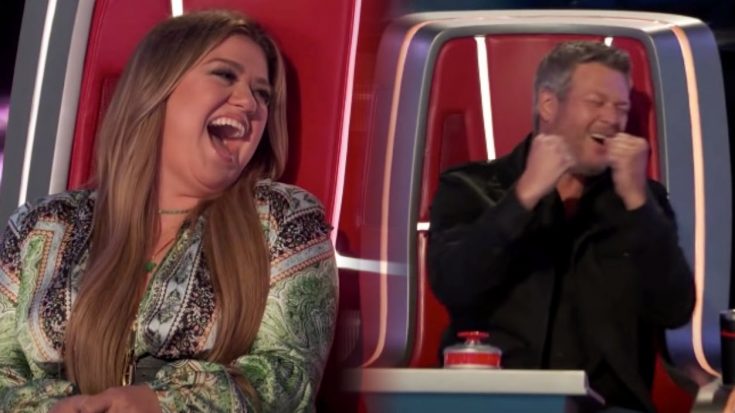 Blake Shelton and Kelly Clarkson have worked together on The Voice for a long time. But the two coaches have been friends for far longer. It’s fair to say they know each other pretty well by now!

When a talented singer auditioned for The Voice with a performance of a country music staple, Clarkson knew Shelton would turn his chair around. So she used her one and only “block” to keep him from claiming the singer for his team.

Sure enough, Clarkson was right to use her block.

The singer in question was Kinsey Rose. She spoke about her Voice journey on her Facebook page, saying:

“Feel pretty dang blessed to have this opportunity. Can’t believe after all my hard work, and years of the Nashville struggle, has come to this door opening.”

Rose auditioned for The Voice with a cover of The Chicks‘ #1 single, “Cowboy Take Me Away.” Clarkson was instantly enchanted by her voice, and waited just a few seconds before she flipped her chair around. She also made sure to “block” Shelton, because her gut instinct told her he was going to turn around too.

Grande told him “no,” so Shelton went ahead and turned his chair. Even though he was expecting it, he was still disappointed to see that Clarkson blocked him.

Clarkson and Shelton were the only coaches who turned for Rose’s audition. So since Shelton was blocked, that meant Clarkson became her coach by default.

“I was telling [Ariana], I know d— good and well Kelly blocked me,” Shelton told Rose after she finished singing.

Needless to say, Clarkson was pleased she managed to snag a singer with a pure country voice! Watch Rose’s audition and the hilarious moment Shelton learned he was blocked by tuning in to the video below.