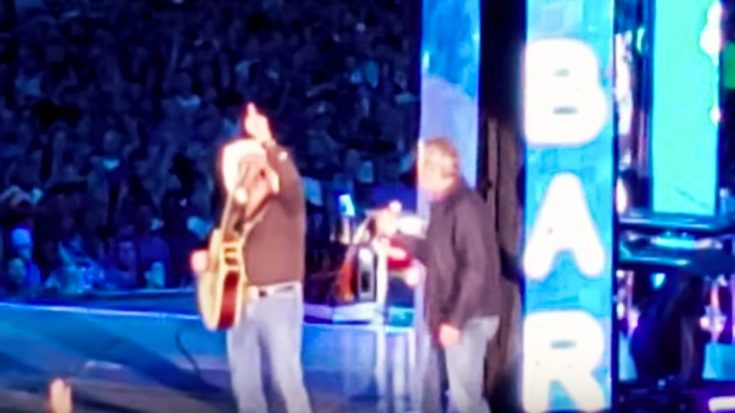 The crowd that gathered to watch Garth Brooks perform during a sold-out show in Boise, Idaho on Friday night was in for a little something extra. Something that no one at any of the superstar singer’s other shows had seen before.

That something was a duet with another star country singer…Blake Shelton. His appearance at the concert was not a surprise, since it was announced weeks ago. Still, the Boise crowd was thrilled to see him there, because his appearance led to a historical occurrence.

On June 18, Brooks and Shelton sent fans into a frenzy by releasing a duet they had recorded together. Titled “Dive Bar,” the song quickly caught on with fans, even though it wasn’t made available on typical music platforms such as iTunes and Spotify (Brooks is famously against placing his music on such platforms).

When asked how the duet came to be, Brooks explained that he approached Shelton at the ACM Awards and asked if he’d like to duet with him. Of course he said yes!

The performance was filmed for an upcoming live music video…so stay tuned for that. But in the meantime, there are also some fan-taken photos and videos of the performance, and they showcase just how fun that moment was.

One person who shared a clip from that night was none other than Shelton’s girlfriend Gwen Stefani, who was watching backstage. The video shows Shelton and Brooks sharing a friendly embrace before Shelton smooches Brooks on the cheek (he tends to do this with many other artists as well).

“Legends,” is all Stefani wrote to caption the photo.

The “Dive Bar” duet that they delivered that night was certainly legendary!

If you weren’t one of the lucky people who was able to watch it live, then don’t worry. We’ve gathered a clip of their performance for you to enjoy below. They start singing “Dive Bar” around the 12:04 mark, but you can watch the whole video to enjoy some of their friendly banter and Shelton performing his hit song “God’s Country.”

Hopefully it won’t be too long before the “Dive Bar” video makes its way online or on TV. Then you can enjoy this performance over and over again in high definition!