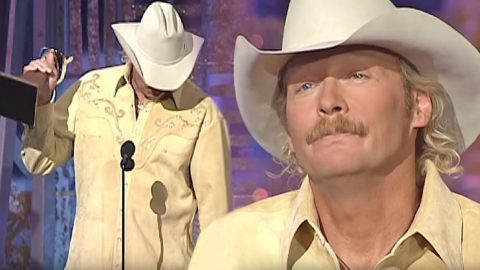 In the wake of the September 11th attacks in 2001, Alan Jackson was left speechless. Like many musicians, the only way he knew how to express his emotions was through song.

He penned the emotionally charged ballad “Where Were You When The World Stopped Turning” shortly after tragedy struck on September 11, 2001. The song’s lyrics center on his reaction to the attacks in the form of questions.

While in the recording stages, Jackson felt uneasy releasing the song, as though he might be capitalizing on a tragedy. His producer, Keith Stegall encouraged him to go through with it and he released it to overwhelmingly positive responses. Everyone could relate to what he was singing.

He first performed the song at the CMA Awards on November 7, 2001 and by 2002, was winning awards for it left and right.

One notable award was the ACM Award for Song of the Year. His acceptance speech moved the entire room to tears, even Jackson, himself. Clint Black presented the award and before he could even read the results from the envelope, a fan yelled “Alan!” And that fan was correct.

“I’ve always felt uncomfortable about the attention this song’s brought to me. And I guess I was always uncomfortable about what it was written about. I’m still angry and sad and forever changed about, you know, what happened that day. I thank God for sending the words of music down to me because I believe I was an instrument for that and for whatever reason. And I don’t feel like I could accept this award for this song without sharing it with and dedicating it to thousands of people, men and women and children that died, and suffered and are still suffering because of that cowardly and heartless attack on America and man kind. This is for all of them.”

He took a few pauses and his voice falters, as he attempted to hold back tears. He was just as emotional in the speech as he is in the song, and we can barely get through this without shedding a tear.

Watch the beautiful acceptance speech below.