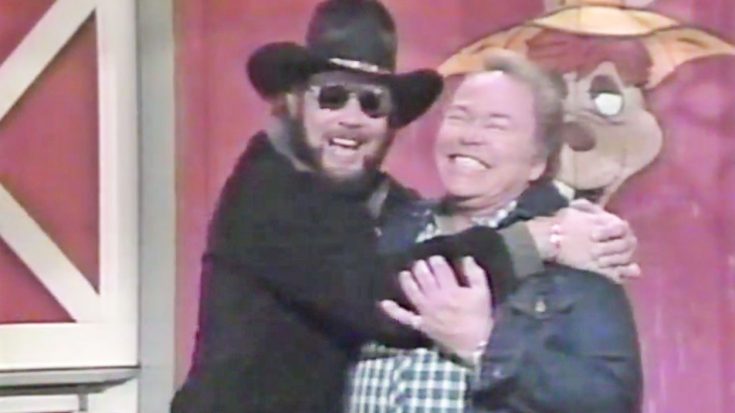 Country music icon Hank Williams Jr. has more than just talent running through his veins. The Hall Of Famer has been producing groundbreaking music for decades, following in his legendary father’s footsteps. While his music sets him apart from most artists, his humor adds quite the excitement to his character.

Who can tell me the year?

Luckily, a good majority of Hank Jr.’s humor was caught on camera. Bocephus got his fair share of TV time on the hit American classic, Hee Haw. The first episode aired in 1969 and went on for 20 years of success with features from some of country music’s biggest stars. From Johnny Cash to George Jones and everyone in between, it became a genre-changing hit!

While Hank Jr. was just a guest on the show, it appears he became a close one! Hugging and joking with Roy Clark became a reoccurring theme and his cornfield sketches only got more comical. In his signature cowboy hat and sunglasses, he charmed the audience with a smile never leaving his face.

When he wasn’t cracking up the viewers, he was putting on some truly unforgettable performances. During Hee Haw’s span of 25 episodes, Hank Williams Jr. performed quite a few times. Just to name a few were, “I’m For Love,” “Ain’t Misbehavin’,” and “Mind Your Own Business.”

The Best Of Times

Now you can treat yourself to a compilation of Hank Jr.’s best comedic moments on Hee Haw! From witty jokes in the cornfield alongside the Hee Haw Honeys to some of your favorite cast members. Hank Jr. even puts on his own rendition of “Pfft You’re Gone” alongside his manager and singer/songwriter, Merle Kilgore.

Check out the video below of Hank Williams Jr. and his hysterical personality!