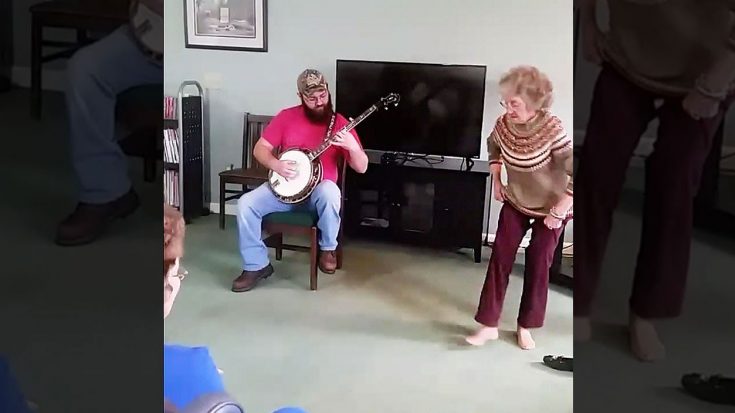 Banjo player Adam Lee Marcus visited a retirement home in Tiger, Georgia to treat residents to a lively bluegrass performance. However, it was Dorothy, an 85-year-old resident, that ultimately provided the entertainment that had Marcus grinning from ear to ear.

The second Dorothy heard the picking of “Foggy Mountain Breakdown,” she kicked off her black loafers and began to dance along to the bluegrass beat.

She maintained pure focus on her dance moves, jumps, and fast footwork.

People were stunned by the woman’s spirit, strength, and carefree attitude, sparking an outpour of praise from viewers of the video. As her performance continued, Dorothy wandered throughout the room, leaving no bare space untouched. Her dance floor gradually grew throughout her performance, as did her pride and unbelievable stamina!

“Foggy Mountain Breakdown” is a famous bluegrass beat, originally written by Earl Scruggs and performed by The Foggy Mountain Boys. The song was most recognized for its feature in the 1967 film Bonnie and Clyde, providing a riveting tune for high speed chases and chaotic mishaps.

As her performance wrapped up, Dorothy bowed down and let out a thrilled “Woo!” Her smiles completely brightened the room pride and excitement in her previous exercise and downright flawless entertainment.

You can watch the unbelievable video below and be sure to share your thoughts and encouraging comments below!