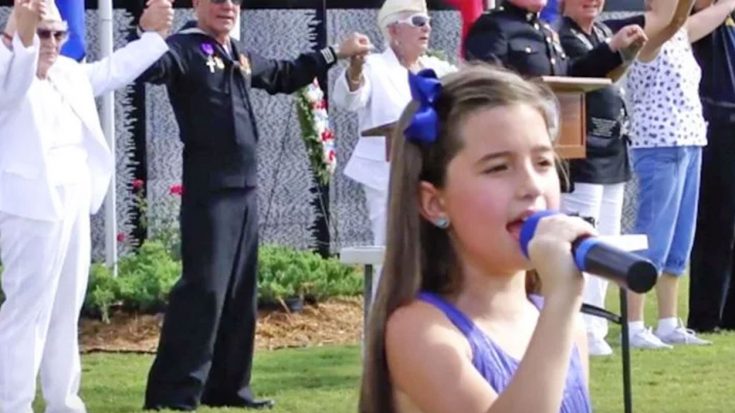 8-year-old Marleigh Miller, clad in a blue dress and matching bow, began singing to an adoring crowd of veterans and their families.

In the middle of the song, the veterans held hands and formed a circle, leading Marleigh to the center. Although the microphone began to cut out, the pint-sized girl continued to sing her heart out and didn’t miss a beat.

During the lyrics, “And I gladly stand up / Next to you and defend her still today / Cause there ain’t no doubt I love this land / God bless the USA,” the crowd lifted their hands in unison for a truly chilling moment.

Greenwood first released “God Bless The USA” in 1984 off his album You’ve Got a Good Love Comin’.

two amusing finds and one shocker at the used record store:
the needham twins' 'identically yours' & lg's 'you've got a good love comin' pic.twitter.com/vGNCpXp3KK

Not only did Marleigh’s composure during the sound system mishap blow us away, but so did her entire performance. Watch it below.