Young Laine Hardy Sings ‘Will The Circle Be Unbroken?’ Before ‘Idol’ Win 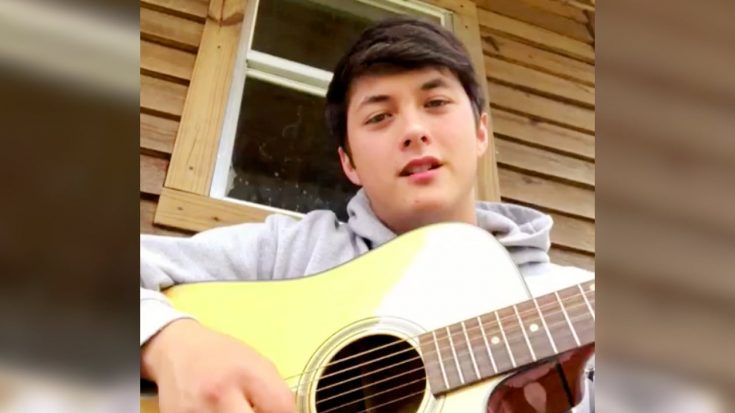 When American Idol revealed that is was coming back in the form of a reboot, singers around the country jumped at the chance to audition. One of those singers was a then 17-year-old boy from Louisiana named Laine Hardy.

The talented young singer instantly impressed the judges. He performed a song titled “Hurricane” by the Band of Heathens, and earned himself a golden ticket to Hollywood.

But Hardy didn’t stick around for long. It soon became clear that the young singer needed to work on his confidence, and he was sent home before the show kicked into lives.

Over the next year, Hardy worked on improving his confidence and refining his talent. He posted a few videos on his YouTube channel during that time, including impressive renditions of Bob Seger and Elvis Presley classics.

Even though Hardy spent so much time working on his stage presence and musical talent, a second Idol audition was the last thing on his mind. However, he agreed to go to the next season’s auditions when his friend, Ashton Gill, asked if he’d play guitar at hers.

He agreed, and the judges were thrilled to see Hardy when he walked in. After much encouragement, he sang a little bit for them as well, and they were blown away to hear how much he changed in just a year’s time.

The judges offered him another golden ticket, and Hardy decided to take a chance and go to Hollywood once more.

Hardy’s second Idol journey has been significantly different than his first. He quickly established himself as a confident, standout star with a whole lot of charm and one powerful voice.

The judges pushed him through all the pre-taped rounds, then the fans voted him through each week of lives. And then, they eventually voted for him to win the whole thing!

A Younger Laine Takes On A Classic

It’s likely that Hardy never wouldn’t have made it that far if he hadn’t taken the time to work on his talent between Idol seasons. During that time, one of the songs that he recorded and released on his YouTube channel was “Will the Circle Be Unbroken?”

The classic song is a popular Christian hymn from 1907 that has since been adopted as a country music staple. One of the most well-known renditions was reworked and recorded by The Carter Family.

Hardy’s rendition of the song was posted to his YouTube channel in July 2018, and recently resurfaced due to his newfound Idol stardom. While the clip he shared only contains the audio, you don’t even need to see Hardy in the act of singing in order to appreciate what he does.

At the young age of 17, it’s amazing to hear how refined Hardy’s voice was at the time. It’s all the more amazing when you listen to his first Idol audition and then this, because you can hear how much his voice had developed in just a few months.

If you’ve loved everything Hardy has ever performed on Idol, you’re sure to appreciate this. Tune in to his version of “Will the Circle Be Unbroken?” in the clip below.

This is something we could put on repeat and listen to over and over again!