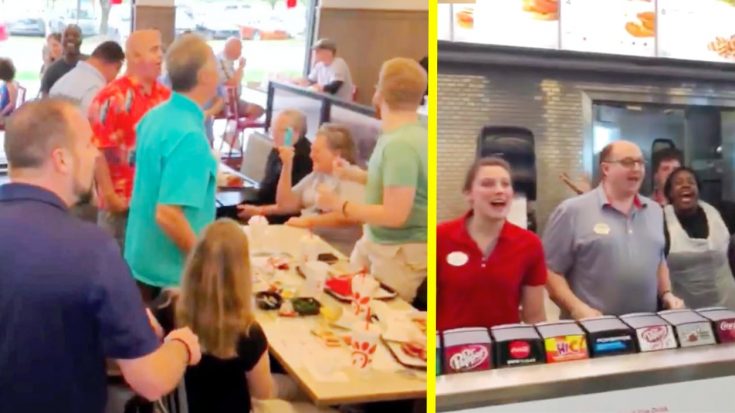 When one worship group stopped by a Nashville Chick-Fil-A restaurant, they weren’t just there to enjoy some tasty chicken sandwiches. They were there to treat their fellow patrons and the employees to a performance they’re sure to never forget.

A now-viral video shows the group, which consists of members of  the Acappella Ministries Worship Leader Institute, suddenly rising from their seats and their meals to burst into an a cappella performance of a beloved song.

The song they chose to perform was the uplifting “Lean on Me,” which was originally recorded by soul singer Bill Withers and released in 1972.

Many artists have covered the song in the years following its release, including country singers such as Keith Urban and Glen Campbell.

The song is so familiar, that the patrons and employees at the Nashville Chick-Fil-A eventually joined in and started singing along with the worship group. This inspiring moment of unity was captured on film, and originally shared online by Jake Jones.

“Whenever you get a group of a cappella worship leaders together it’s hard for us not to sing together,” Jones told FOX News.

He then went on to explain why they planned the performance at that Chick-Fil-A:

“The flash mob was planned to encourage patrons and employees at the Chick-Fil-A. We’ve noticed every time we do something like this, people comment on the videos saying, ‘This is just what I needed,’ ‘We need more of this,’ and ‘Why can’t we have more of this in the world?’  We never know who will be touched through this.”

As of press time, the video has been viewed over a million times, and it’s spreading like wildfire online. We wouldn’t be surprised if this thing soon has views in the multi-millions.

Go ahead and join the many people who have already enjoyed this dazzling performance by watching the video below. It has taken the internet by storm!

How would you have reacted if you were one of the people in the Chick-Fil-A when these folks broke out into song? We feel like we would have found ourselves singing along with them!

A group of us from Acappella’s Worship Leader Institute went to the Rivergate Chik-fila in Nashville TN. and this happened!