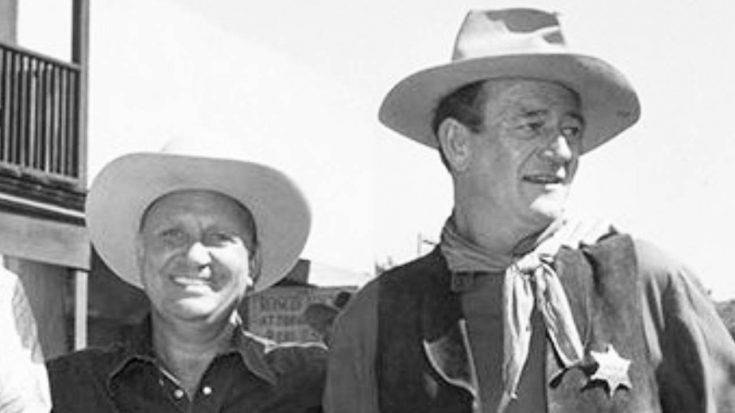 John Wayne is quite possibly one of the most famous cowboys that has ever been on screen. With over 179 acting credits to his name, he has solidified himself as a legend.

"A man oughta do what he thinks is best." pic.twitter.com/eWyWPv0H5f

His acting career began with minor roles in the 1920s, but became a leading man at the age of 23 in the 1930 film The Big Trail.

Abruptly, he stopped signing in his movies and for many years, his fans wondered why. In 1976, over 40 years after his last singing cowboy role, Wayne did an interview with Phil Donahue where there was a Q&A portion with the live audience.

One woman asked, “Why in the early movies did they have you sing?”

Without hesitation, Wayne responded, “This is a question I raised to the producer. They had a picture in which the hero hummed every time he got mad, was going to kill somebody. And then they put words to it. Then the Southern exhibitors kinda liked it so they added another song.”

He described his two co-stars standing beside to him, one with a guitar, one singing, and himself with what he calls “a phony thing on my lap,” as he imitated strumming a guitar.

It got to a point where he was singing up to four songs in the movie, which he didn’t name, and he was always running around looking for a guitar. That was when he knew he had had enough. He explained how he put his foot down to the studios.

“I finally went to the boss and said, ‘I’ve had it. Kids are now asking me to sing ‘Ol’ Silver-Haired Granddaddy’ when I get on stage and it’s not my racket,'” Wayne explained. “He says, ‘Well, what’ll I do?” I said, ‘Go get the biggest hillbilly singer in the country and make a star out of him.’ He did. It was Gene Autry.”

You can hear many audience members say, “Wow,” after hearing that John Wayne basically started Gene Autry’s legendary career! From 1934 to 1953, Autry appeared in 93 films and became known as “The Singing Cowboy.”

He has so many other accolades to his name including being the only person to be awarded stars in all five categories on the Hollywood Walk of Fame, for film, television, music, radio, and live performance.

It’s crazy to think that he may not have had the career he had if it weren’t for John Wayne refusing to sing anymore!

Watch Wayne tell that story below.