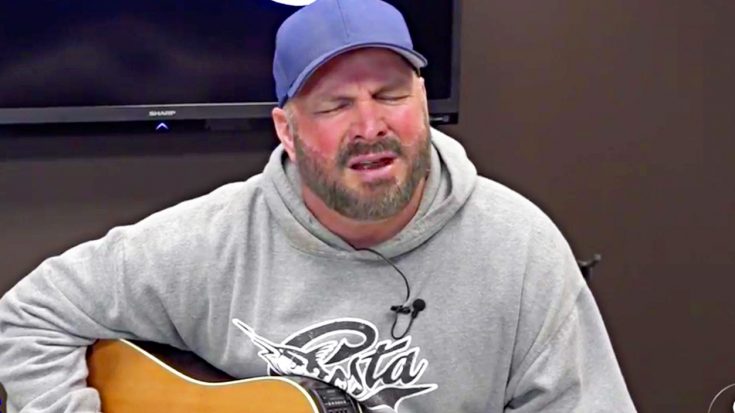 “It’s a song that’s never even been recorded,” Garth Brooks says before making sure that his producers are okay with him performing the song for the first time.

Brooks has found a new way to connect with his fans and friends using a weekly live stream video session on Facebook – and it’s during one of his most recent episodes that he debuted this heart-rending song.

Dedicating the performance to a survivor of the Marjory Stoneman Douglas High School shooting in Florida, Brooks began to get tearful as he sang this powerful song.

“Okay, Miss Emma,” Brooks said, speaking directly to Emma Gonzalez, who penned a letter about the upcoming March for Our Lives. “It’s not yours to change, it’s yours. You understand that? You’re the future…This is your world. Take it, shape it, mold it.”

Grabbing his guitar, he sang this unreleased song written alongside famed songwriter, Tony Arata. Brooks’ hit “The Dance” was written by Arata. He doesn’t name the song, but the subject matter is about a father who tells his children that they are the changing force of the world.

#ThrowbackThursday to 2 weeks ago when we witnessed a historic night at the Bluebird Cafe. The @AliveHospice benefit show with @garthbrooks, Kent Blazy, @victoriashaw, Pat Alger & Tony Arata was a night we'll never forget.(Photos by Ben Krebs c GCOM, LLC all rights reserved 2018) pic.twitter.com/uMFtyNKZLD

At the end of this beautiful segment, Brooks wiped away a tear from his face, saying “Miss Emma; everybody who will be marching: Love. Do not let hate win. Love.”

Watch Garth Brooks sing this never-before-heard song below and tell us what you think in the comments.

Houston, you broke a #RodeoHouston record! Everything IS bigger in Texas!!! HA!!! I love you, g #StudioG