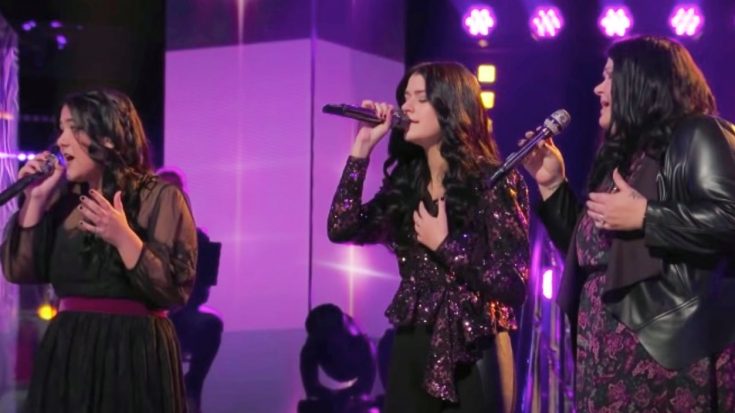 During the pretaped portions of each Voice season, the contestants’ fates are left in the hands of the coaches. They are the ones who decide who stays and who goes, and the fans have no say in it. The fans finally get to vote for their favorite contestants once the live shows kick off.

A total of 17 artists went in to the first week of live shows during Season 19. But when all of the eliminations were complete on December 1, only nine artists remained.

The four artists who competed for the Wildcard Instant save had to perform a song on the spot. As mentioned above, one of the contestants in the Instant Save round was Team Blake’s mother-daughter trio Worth the Wait.

From the start of the season, Worth the Wait has generated a lot of buzz. People have fallen in love with their enchanting harmonies on songs such as “Delta Dawn” and “Love Is Alive.”

Their own coach felt they had the potential to be the first trio to ever make it to the Voice finale. So it surely came as a shock to him and many fans that they were left to fight for their spot on the show in the Instant Save round.

The trio delivered a cover of the meaningful Martina McBride song “I’m Gonna Love You Through It.” McBride released the track in 2011 and reached the fourth spot on the Hot Country Songs chart.

Once again, the mother-daughter group placed their stunning harmonies on full display in their performance. Shelton complimented them after they sang, and then everyone waited to see if they’d make it on into the Top 9.

After all of the Instant Save performances were over, fans voted for their favorite performance in real time. The voting window was only open for a short period before the winner was named.

In the end, the fans chose Team Legend’s Bailey Rae as the winner of the Instant Save. Worth the Wait was eliminated, as was Tanner Gomes of Team Kelly and Payge Turner of Team Gwen.

Even though Worth the Wait didn’t win the Instant Save, they should feel proud knowing they gave their final Voice performance their all. You can watch them sing “I’m Gonna Love You Through It” in the video below.

While this may be the end of Worth the Wait’s journey on The Voice, we have a feeling this won’t be our last time seeing them in the spotlight!