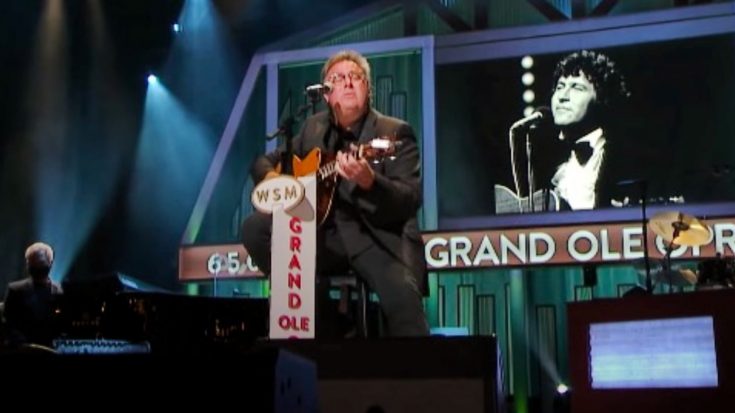 Singer, songwriter, and actor Mac Davis passed away on September 29, 2020 at the age of 78. Many people knew him best as the songwriter behind some of Elvis Presley‘s most iconic songs, including “Memories,” “A Little Less Conversation,” “Don’t Cry Daddy,” and “In the Ghetto.”

The latter of those four above mentioned songs was released by Presley in April 1969. His recording went on to claim the #3 position on the Billboard Hot 100.

Davis later went on to share his own recording of “In the Ghetto.” His recording appeared on a greatest hits album he released in 1979. Though footage exists of him performing the song years earlier.

A few days after Davis’ passing, Vince Gill took to the stage at the Grand Ole Opry to honor the late artist. Instead of singing “Go Rest High on That Mountain” like he’ll often do for tributes, Gill opted to sing “In the Ghetto” in Davis’ memory.

Seated at center stage, Gill began singing with nothing more than the sound of his own acoustic guitar to back him up. But he played so softly that he was basically singing a cappella as he moved through the emotional lyrics of “In the Ghetto.”

A black and white photo of Davis remained on the screen above the stage throughout Gill’s performance. By the time he finished singing, it was so quiet you likely could have heard a pin drop on the stage floor.

Tune in below to see Gill pay tribute to Davis by singing “In the Ghetto.” Be prepared to shed a tear or two before the performance ends.

May Davis rest in peace.