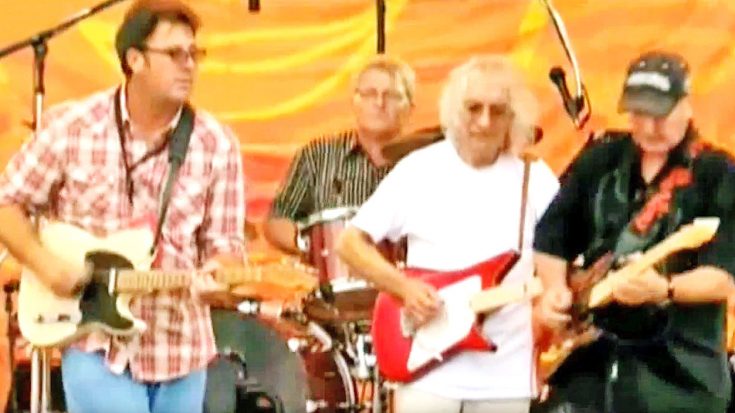 Once upon a time, even Elvis Presley was just an up-and-coming artist striving to make a name for himself in the industry. One song helped him do just that, and that song was called “Mystery Train.”

Written and recorded by blues musician Junior Parker, the first version of “Mystery Train” was released in 1953 on the Sun record label. Presley released his version of the song two years later, which was also on Sun.

Paired as the B-side to “I Forgot to Remember to Forget,” “Mystery Train” chugged into the Top Ten on the Billboard Country and Western chart. Elvis found his claim to fame through the song, as it made him an instant star in the country music scene.

Decades after the release of “Mystery Train,” Rolling Stone named it as the 77th greatest song of all time. Considering how many songs have been released over the course of history, that means a lot!

For those wanting to pay tribute to Presley, “Mystery Train” is always a solid choice to go for. This is something Vince Gill is well-aware of, which is why he occasionally performs the song as a way of honoring “The King.”

Some years ago, Gill joined legendary guitar players James Burton and Albert Lee to play “Mystery Train” together. Gill is quite the guitar player as well, so you can bet that stage was rockin’ once those three kicked things off!

The tribute had everything you could ever wish for in a performance: smooth, bluesy vocals from Gill, an abundance of skillful guitar solos, and a fun-lovin’ vibe. Watching the video of the performance, you can tell that all of the players on the stage were having a blast jamming out together.

We’re sure you’ll have a good time watching Gill and the other guys honor Presley with “Mystery Train.” Check out their performance in the clip below.

These fellas know how it’s done!