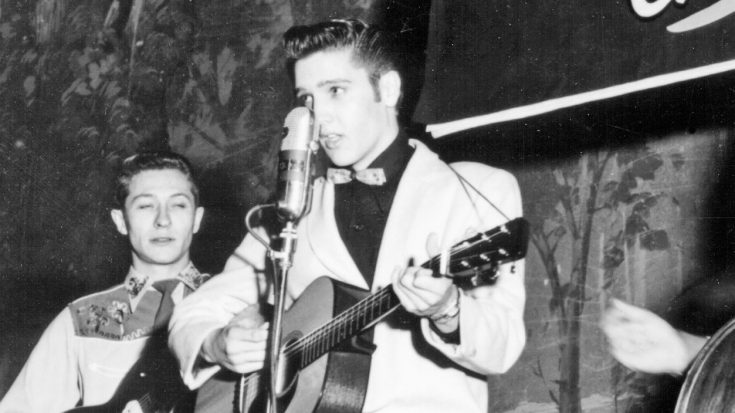 Elvis Presley has achieved perhaps one of the most iconic music careers throughout the history of entertainment. His humble start to fame is often overlooked in light of his fancy decor and ritzy lifestyle he enjoyed later in life. However, Presley was a self-taught phenomenon, learning the ropes on his own as he embarked on what would become one of the most influential journeys ever taken.

An unreleased recording of Presley performing live previously emerged from the archives, giving fans a dose of “The King” during his early days, before his massive break into stardom. Credited with the popular catch phrase “Elvis has left the building,” Horace Logan hosted the young rock ‘n roller on his radio show, Louisiana Hayride, back on October 1, 1955. Calling Presley a “modern day type” musician, Logan introduced the singer to a crowd, who were all eager to see the hunk perform!

Presley can be heard on the audio clip revealing his song to the audience, mumbling the words “I Forgot To Remember To Forget.” With that, the music legend kicked off an incredibly raw performance of passion and unfathomable talent. As the singer wrapped up his act, Logan told his crowd, “That was Elvis Presley with… a song that’s been doing remarkable well across the country for the past several weeks.”

The song was released in 1955 and spent five weeks at number one on the Billboard charts. It was said that Presley almost refrained from recording the song due to it sounding a bit too country. The song was put on The Sun Sessions, a compilation of tunes the rock and roll legend recorded while at Sun Records between 1954 and 1955.a

Talk about a blast from the past! Check out the rare performance below!