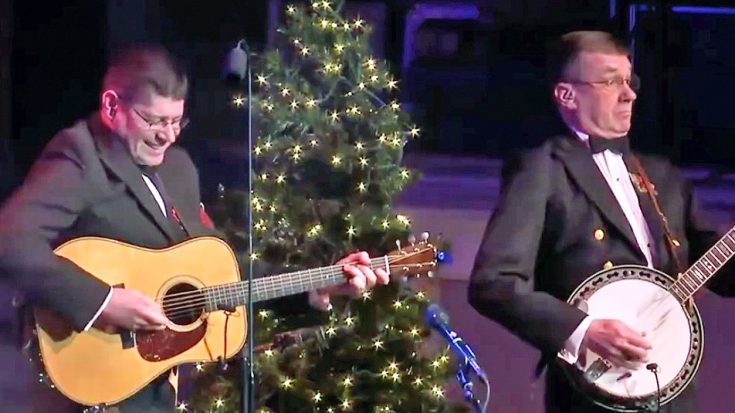 Few instrumental songs are as recognizable as “Dueling Banjos.” The tune has been around for decades, but earned an iconic status after it was featured in the 1972 film, Deliverance.

Written by Arthur “Guitar Boogie” Smith, “Dueling Banjos” was originally called “Feudin’ Banjos.” It was first recorded on a four-string plectrum banjo and was accompanied by a five-string bluegrass banjo. The version in Deliverance is played between an acoustic guitar and a banjo, and it’s that version that people seem to hear the most often. But have you ever heard a Christmas version of it?

During one of their holiday concerts in 2015, the United States Navy Band offered a festive twist on “Dueling Banjos.” Like in Deliverance, the “duel” took place between a banjo player and an acoustic guitar player.

The two band members started off playing the song just like normal. We’re sure that some of the audience members were probably wondering what type of place “Dueling Banjos” had in a Christmas concert!

You may start wondering the same thing when you watch the clip below, but just wait.

The Christmas twist comes in the middle, and it’s quite spectacular. The guitar player starts playing a familiar tune y’all would know as “Jingle Bells,” and the banjo player answers him. This call and response thing keeps going for a little while, picking up the pace bit by bit until…

Suddenly, the two band members burst into some fast-paced pickin’, but still keep up the “Jingle Bells” tune. We don’t know if y’all have ever heard “Jingle Bells” on a banjo before, but it sounds pretty cool! Go ahead and see for yourself in the clip below.

Hats off to these gentlemen for delivering one jolly cover of a country staple!