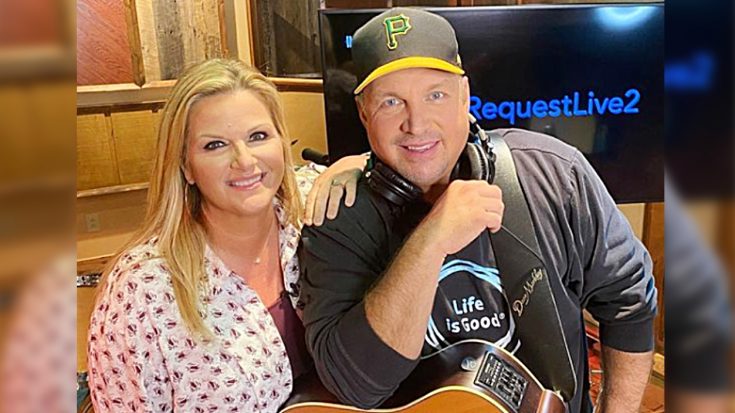 In a statement released to Garth Brooks’ Facebook page on Wednesday, February 24, 2021, it was revealed that both Garth and Trisha were at home quarantining due to a positive COVID-19 test by a member of their team. Because of their team member testing positive, the couple was subsequently tested themselves, and Trisha’s test came back positive, revealing she had contracted the virus. However, Garth’s test was negative.

Garth disclosed in the statement:

“The Queen and I have now tested twice. Officially, she’s diagnosed as ‘on her way out of the tunnel’ now, though, which I’m extremely thankful for.”

The recent severe winter weather in Tennessee prevented the couple from getting tested right away when they discovered they had been exposed. They were able to get tested almost a week after the initial exposure and have been quarantining since they were aware of the exposure.

In the statement, Garth shared his affections for his wife saying, “Anyone who knows me knows my world begins and ends with Miss Yearwood, so she and I will ride through this together. And anyone who knows her knows she’s a fighter, and she’s been doing everything right, so I know we’ll walk out the other side of this thing together.”

He admitted that Trisha is having to deal with some symptoms of the virus, but “she’s tough” and admittedly says she’s stronger than he is.

Finishing the statement, Garth asked their fans for good thoughts and prayers to be sent their way. Admitting he is fearful of the long-term effects the virus may have on her.

“Living with her, I sometimes take it for granted she’s one of the greatest voices in all of music, so the possible long-term effects on her concern me as her husband and as a fan. We’re very lucky she is currently under the greatest care in the best city for treating and healing singers.”

We are sending both Trisha and Garth all the good vibes and prayers to get well soon!