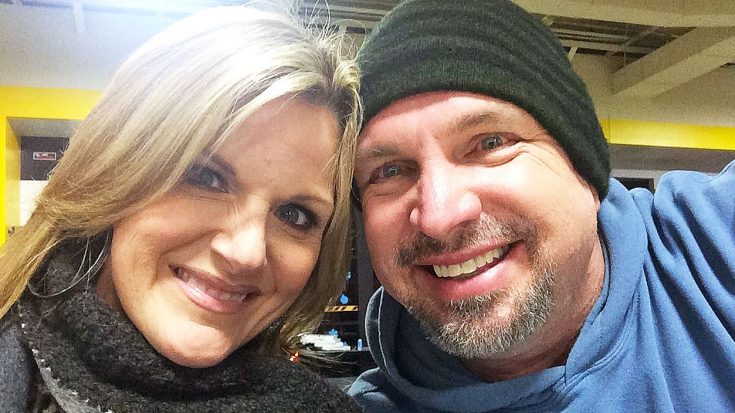 Even when they were on tour, Garth Brooks always made sure that Trisha Yearwood‘s birthday was an extra special day. As just a few examples, he has led entire crowds in birthday sing-alongs and once brought Kelly Clarkson out to surprise her.

Not to mention all of the sweet things he says about her leading up to her birthday in interviews or on social media.

So when Brooks’ birthday rolled around in 2018, Yearwood knew she had to honor him in a special way.

She found the perfect way to do so, and it included her sharing a priceless snapshot the two of them took together way back in the day.

The photo, which is a true blast from the past, is undated, but it’s clear that it shows Yearwood and Brooks in the early years of their careers. Long before they were married, the two were the best of friends, and frequently worked together on albums and tours.

Shot in black and white, the photo shows Yearwood and Brooks standing cheek to cheek, with Brooks’ arm wrapped around Yearwood’s shoulders. Both offered big smiles to the camera, showing how happy they were to be spending time together.

Her Caption Is The Sweetest Part

As sweet as the snapshot was, the short note that Yearwood wrote to accompany it was equally so. Calling Brooks her “best friend,” she wished him a happy birthday and said, “I’m so lucky to get to celebrate with you.”

The photo appears to be a favorite of Yearwood’s, because she also posted it to celebrate Valentine’s Day in 2017. We can see why she loves it so much, because it’s adorable!

Happy Birthday to my best friend! I’m so lucky to get to celebrate with you. All my love, T

How cute is that? Maybe for Brooks’ birthday, the two of them worked together to make one of his favorite desserts…peanut butter balls.

Back in 2012, Brooks appeared on his wife’s cooking show Trisha’s Southern Kitchen to cook some of their go-to recipes, including peanut butter balls, which he has enjoyed making with Yearwood and his daughters for years.

You can tune in to the 10 minute mark in the clip below to watch Brooks and Yearwood whip up some peanut butter balls together. We think a batch of those would make Brooks’ birthday even sweeter every year!