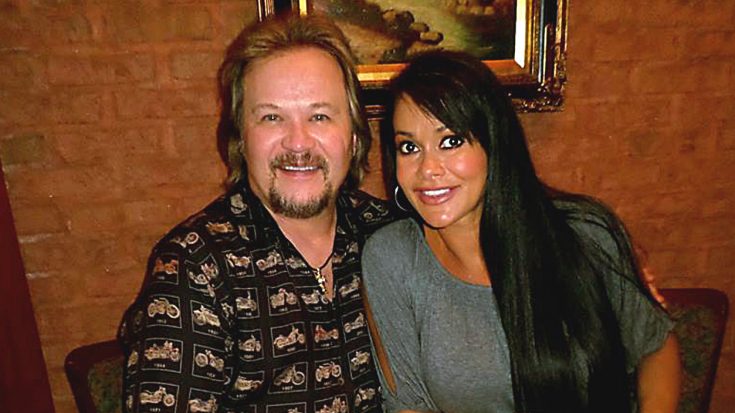 After 21 years of marriage, Travis Tritt and his beautiful wife, Theresa, are as madly in love as ever. The couple married on April 12, 1997, and eventually welcomed three children: sons Tristan and Tarian, and daughter Tyler.

In celebration of their 21st wedding anniversary, Travis took to social media to share some sweet words for his wife. Along with an adorable photo of the two of them, Travis wrote a short note to wish her a happy anniversary.

Travis opened his note by talking about how he first met Theresa in 1995, and how they married just two short years later. We feel like it’s safe to say that it was probably love at first sight for those two!

But as strong as their love was then, Travis feels that it is even more powerful now. In a swoon-worthy statement, he wrote to Theresa, saying, “Our love has grown stronger over the years and God couldn’t have created a more perfect match for me.”

In closing, Travis wished his wife a happy anniversary and then told her he loved her. But rather than just say “I love you,” Travis took it to the next level.

“Happy Anniversary, Theresa! I love you more than you’ll ever know!” he wrote.

This is especially meaningful, since Travis wrote his song “More Than You’ll Ever Know” when he and Theresa had to spend some time apart when they first started dating.

We met in February of 1995. On April 12, 1997 she became my wife. Our love has grown stronger over the years and God couldn’t have created a more perfect match for me. Happy Anniversary, Theresa! I love you more than you’ll ever know!

Travis wrote similar, but slightly different messages to Theresa on Facebook and Twitter. He also shared a different photo of the two of them, which is just as cute as the first.

In this particular note, Travis also mentions how grateful he is to have Theresa in his life. He writes, “I’m truly blessed to have a best friend as my wife.”

We met in February of 1995 and she became the love of my life. On April 12, 1997 we were married. God could not have picked a better match for me and I’m truly blessed to have a best friend as my wife. Happy Anniversary, Theresa! I love you more than you’ll ever know! pic.twitter.com/ylIDiWyZxg

While Travis and Theresa often have to be apart while he’s on tour and she’s at home with their kids, they make a point to carve out time for each other. Every year, they clear their schedules so they can attend the Kentucky Derby together. It’s sort of a “date” for the two of them.

The two have now been attending the Kentucky Derby for over two decades. As longtime attendees, they’re often stopped by reporters to chat on the red carpet. You can watch one of their interviews in the clip below.

You can just see in their eyes how much love they have for each other!