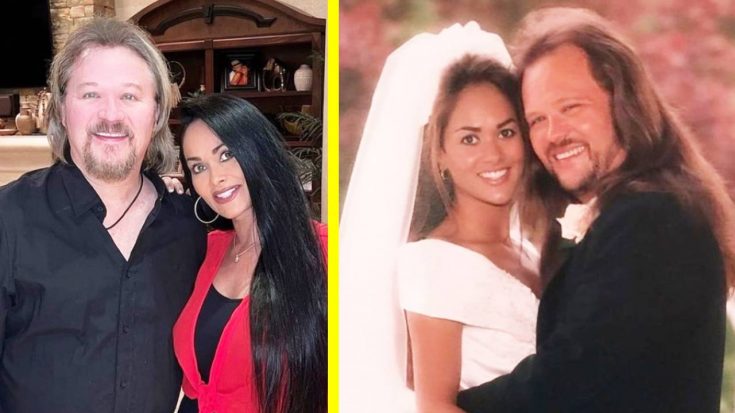 Travis Tritt and his wife, Theresa, met because of a chance meeting after a “Marty Party” taping with country legend Marty Stuart. They began dating and were inseparable for the next three to four months, before the country singer had to go out on the road for a few performances.

Being apart from Theresa made Travis realize how much he missed her and after not being able to contact her for two weeks, he wrote the song “More Than You’ll Ever Know.” They have been together ever since.

The Tritts were married on April 12, 1997 and welcomed three children, Tyler, Tristan, and Tarian, into the world shortly after.

Even after all these years of marriage, Travis and Theresa are still so in love and continue to gush about each other. On their 21st anniversary, Travis said, “Our love has grown stronger over the years and God couldn’t have created a more perfect match for me.”

He has also said, “I’m truly blessed to have a best friend as my wife,” while also calling her his best friend.

This year, they celebrated a very special anniversary, their 25th, also known as a silver anniversary. To commemorate, Travis shared several photos from their 1997 wedding, which featured lots of hair from both Travis and Theresa. It showed details of their wedding we never knew about, like Travis singing a song for his bride, Marty Stuart and Rickey Skaggs serving as groomsmen, with Marty even singing for their first dance.

Alongside the series of photos, he wrote, “I met the true love of my life in February 1995 and on April 12, 1997 we were married. Today we celebrate our 25th wedding anniversary. Theresa, you have made the past 25 years so special, filled with love, family and the most incredible moments of my entire life. I love you with all my heart and I always will. You are my rock, my soulmate and my very best friend. I look forward to sharing the rest of my life with you! Happy Anniversary, Sweetheart!”

See Travis’ post below, and make sure to swipe through to see all the amazing pictures from their wedding.