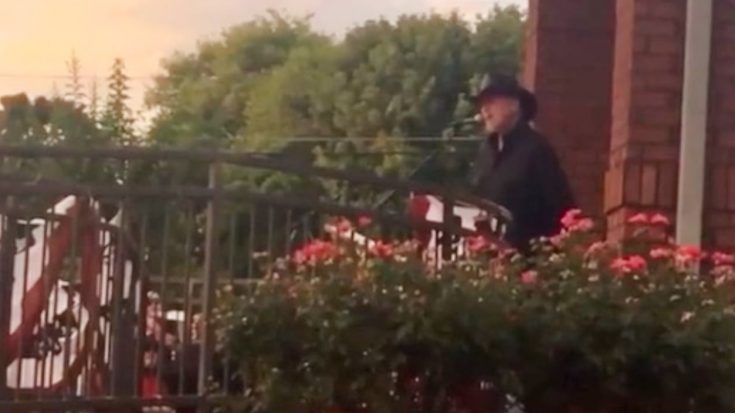 On July 6, Charlie Daniels passed away after suffering a hemorrhagic stroke. Later that day, his body received a police escort to the Sellars Funeral Home in Mt. Juliet, Tennessee.

People lined the street to pay their respects to Daniels as the hearse drove by. According to The Tennessean, many of the spectators wove American flags and “were openly crying.”

As a devoted patriotic and outspoken supporter of the military, it seems fitting that people chose to honor Daniels by holding American flags as his hearse passed.

Daniels’ love for his country was incorporated into a patriotic-themed service held in his memory on Wednesday (July 8). The service included military honors and an aircraft flyover.

Musical performances were also part of the service. Trace Adkins, Daryl Worley, and Tracy Lawrence all sang in Daniels’ memory.

Adkins performed his 2005 single “Arlington.” The song tells the story of a Marine who was killed in battle, and is brought to his final resting place at Arlington National Cemetery.

Those who didn’t get the chance to attend Daniels’ patriotic service were still able to hear a small portion of Adkins’ performance. He posted a slideshow on Instagram that included a clip of him singing “Arlington.”

The first thing in the slideshow was a picture taken of Adkins during the service. In the caption, he included the words he spoke in Daniels’ honor:

You can read Adkins’ full message about what Daniels meant to him by looking at the below slideshow. Flip through it to see a video of him singing “Arlington” during the service.

Like Adkins, our hearts ache whenever we think about how Daniels is no longer with us. But his legacy lives on through the songs, stories, and loved ones he left behind.

"After I had a record deal and got into this business I became friends with Charlie Daniels. And I can honestly say that there's a hole in the fabric of this country today, and Charlie Daniels left that hole. I've known a lot of good men in my life, I still know a lot of good men but when you talk about great men the list is short. But Charlie Daniels was on that list for me. There were a couple of times when I was at a crossroad in indecision… I had no idea what to do. When I finally got to my wits-end I surrendered, picked up the phone and called Charlie. He would always listen like somebody that loves you and cares about you and listens to you – you know what I'm talking about. And then he would give me advice. And his advice was always grounded in integrity, seeped in wisdom but was tempered with humility." RIP Charlie Daniels @thecharliedanielsband