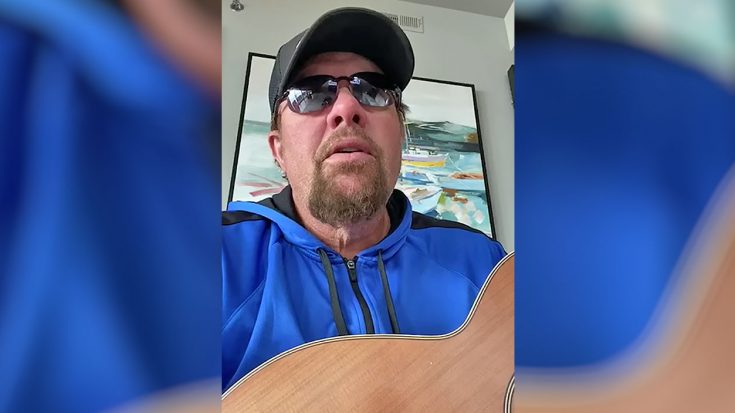 Toby Keith has been quarantined down in Mexico and left his guitar back in Oklahoma. He stopped by a furniture store of all places and bought an old guitar to keep him entertained during quarantine thus calling his latest collection of videos, Furniture Store Guitar Sessions.

In his most recent video, Keith takes things back 15 years ago to his 12-track album, Honkytonk University. On the album, Keith was able to have Merle Haggard sing with him for the song “She Ain’t Hooked On Me No More.”

Toby recalls when he finished writing the song he thought it sounded a lot like something Haggard would sing. He states,

“Hey we got Willie to sing Beer for my Horses, what if we get Haggard to sing this?”

Of course, Keith is referring to his album Unleashed, which featured Nelson on the 5th track titled “Beer For My Horses” -a song with a humorous take on hunting down outlaws and lynching them.

Keith went on in the video to say,

“[Haggard’s] been such and influence on us, we wanted to see if we could get him to do it.”

Even though Keith successfully got Haggard to sing with him on the tack, he goes on to say that the song didn’t get much radio play since stations were starting to pull away from traditional country.

He finishes with a thoughtful note saying,

“I’m glad I got to sing with my hero on a song that I wrote.”

Watch the video below to hear Toby Keith sing “She Ain’t Hooked On Me No More.”

Furniture Store Guitar Sessions: "She Ain't Hooked On Me No More"

Toby was honored to get to sing with his hero Merle Haggard on “She Ain’t Hooked On Me No More”. The song was featured on his Honkytonk University album that just turned 15!