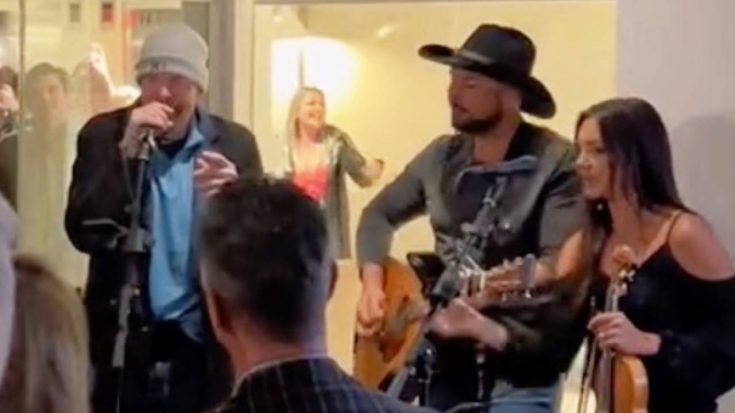 Guests enjoying some live music at a hotel bar in Norman, Oklahoma were recently treated to something completely unexpected!

Married duo, Tim & Taylor, were performing a pop up show at a hotel bar and all of a sudden, Toby Keith showed up. Not only did he show up, but he crashed their performance – and sang for 30 minutes!

“It was a lot of fun getting to play with Toby. He still sounds great. We were just hoping we’d know how to play every song he wanted to sing!” Taylor said.. “When Toby started walking towards us, I thought he was just gonna tell us ‘good job’ or something of that nature and go back and sit down, but he then got up and started singing [George Strait’s] ‘Amarillo By Morning.’”

Toby’s impromptu set list included “Amarillo By Morning,” “The Devil Went Down To Georgia,” “Mama Tried,” “Whole Lot Of Shakin’ Going On,” and “Johnny Be Good.”

This performance comes five months after the legend revealed he had been battling stomach cancer for the last six months.

“Last fall I was diagnosed with stomach cancer. I’ve spent the last 6 months receiving chemo, radiation and surgery. So far, so good. I need time to breathe, recover and relax,” he said. “I am looking forward to spending this time with my family. But I will see the fans sooner than later. I can’t wait. -T”

This marks the second time Toby has taken the stage in a surprise appearance to sing this month! On November 5, he showed up at 2022 Breeder’s Cup pre party.

He loves this bar 🎶🎸 pic.twitter.com/S9cDPFFnOy

Watch Toby crash the stage and perform “Courtesy Of The Red, White, and Blue” below.

@timandtaylorofficial We had so much fun last weekend in Norman, OK. Thanks for singing with us @Toby Keith !!! 🤠 #tobykeith #courtesyoftheredwhiteandblue #timandtaylor ♬ original sound – Tim & Taylor