Tim McGraw Shares Shirtless Photo With The Fish He Caught 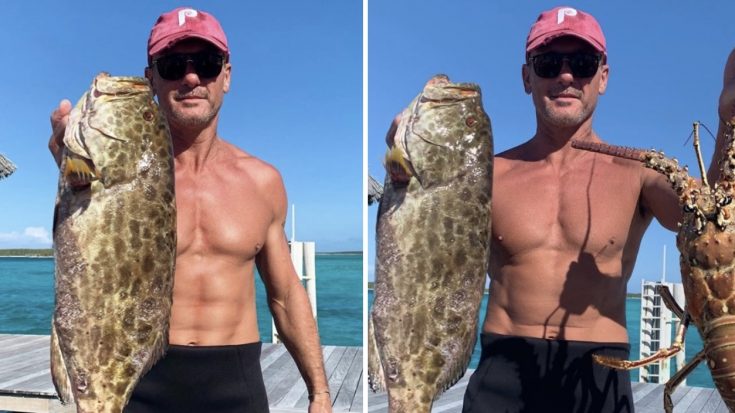 There’s no one else in country music who is chameleon quite like Tim McGraw.

Between his different looks throughout his career and his varying movie roles, even McGraw knows he’s made many transformations in his lifetime.

This is dead on… And hilarious.  Great job @WhiskeyJam and @ryanonan

But not only has he been making a physical transformation in the last ten years, he also made a mental one and he told PEOPLE all about it in October 2019.

He said, “My mind is clearer, my sense of purpose is sharper, and my relationships are deeper. Consistent physical exercise helps me bring focus to my life and to the people who mean the most to me.”

His transformation really began in 2008. Before every show, McGraw used to drink alcohol to settle his nerves, but his friends were concerned. He stopped drinking entirely and began working out twice a day.

“That’s where my workout program came into play,” he said. “It took the place of alcohol and it is really important.”

One way that we do see his physical transformation pay off is when he posts pictures after a great day of fishing, like he did on Tuesday (Feb 18). As fans know, McGraw enjoys spear fishing, much of which he does in the Bahamas near his private island home.

Proudly showing off his latest catches, which includes a yellow fin grouper and a massive lobster, McGraw posted the series of photos on Instagram donning a wetsuit, but with the top half pulled down.

See ya in Philly on September 12!!!! Right now I’m #HereOnEarth

Watch McGraw and wife Faith Hill show off their home in the Bahamas below.