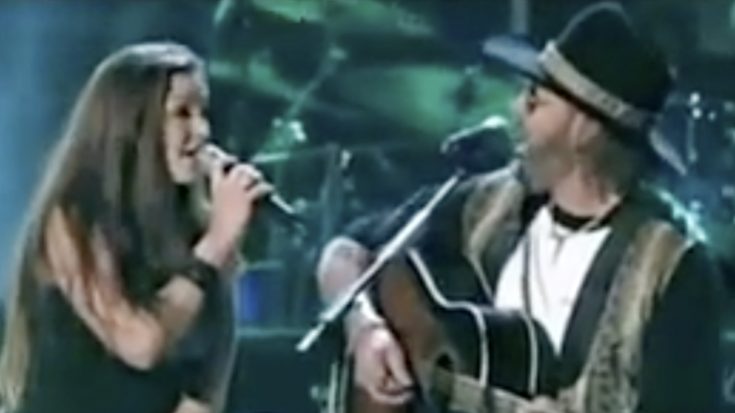 For a special 2004 television special titled CMT OUTLAW, Hank Williams Jr. and everyone’s favorite “Redneck Woman,” Gretchen Wilson, teamed up to sing one of his songs from the 1970s.

For this special “Outlaw” night, they chose a very appropriate song to perform together – “Outlaw Women.”

“Outlaw Women” was included on Hank Jr.’s November 1979 Whiskey Bent and Hell Bound album, which was actually his second album he released that year. The first was Family Tradition just a few months prior in April.

Whiskey Bent and Hell Bound peaked at number five on the Billboard Top Country Albums chart and was certified Platinum by the RIAA, making it his third Gold album certification of his career, and his first Platinum.

The album generated two major hit singles, “Whiskey Bent and Hell Bound” and “Women I’ve Never Had,” which peaked at number two and number five, respectively, on the Billboard Hot Country Singles & Tracks chart. Other notable songs included on this album were his cover of George Jones‘ “White Lightning” and his duet with Waylon Jennings, “The Conversation.”

When it came time for Gretchen and Hank Jr.’s duet, they slowed it down a bit, but at the same time, delivered a hard-rocking performance.

“You know, I wrote a song a long time ago. It was probably all about you,” he said, looking directly at Gretchen.

Sitting on a couple of bar stools, the country legend began strumming the well-known guitar intro with Wilson looking on. The “Family Tradition” singer took lead vocals on the first few lyrics before Wilson joined him for the powerful chorus.

“These outlaw women, first of their kind / Outlaw women they got here right on time,” the two sang together in perfect – and badass – harmony. We’ve heard this song played many times, but this collaboration has got to be our favorite.

Enjoy their full performance in the video below.