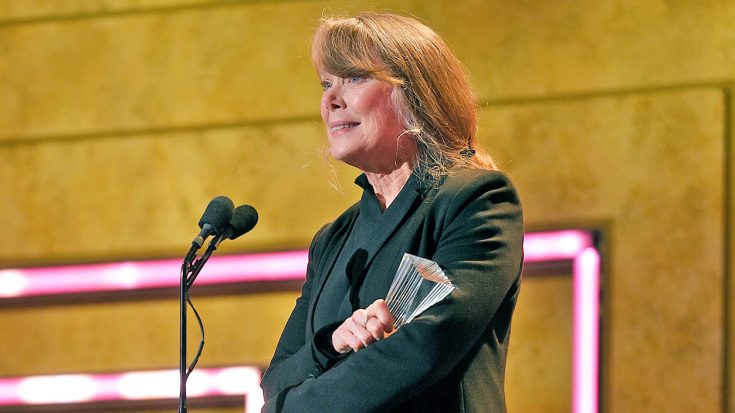 It all began in the 60s when Loretta Lynn started off her career with the album Loretta Lynn Sings… From there the talented singer went on to produce decades worth of chart-topping hits. Just a few include “You Ain’t Woman Enough,” “Fist City,” and “Coal Miner’s Daughter.”

This past year, Lynn released her latest album Wouldn’t It Be Great reuniting her fans with her classic country style. Not long after the release of her album, the queen found out that she was set to receive an award at the CMT Artist of the Year Awards .

But this won’t be the first incredible award that Lynn has received during her career. Aside from being a Grammy award-winning singer-songwriter, she also received the Presidential Medal of Freedom from President Obama in 2013.

At this year’s ninth annual CMT Artist Of The Year celebration, Lynn was presented with the Artist of a Lifetime award. Oscar-winner Sissy Spacek, who played the part of Lynn in her movie memoir, Coal Miner’s Daughter, accepted the award on behalf of the country music icon, who backed out hours before the live broadcast due to illness.

Spacek took the stage to speak about the woman who she portrayed many years ago.

“I loved playing Loretta in Coal Miner’s Daughter. I just loved being her. I had the band, I had the bus, I had the clothes. But I think we can all agree, there’s only one Loretta Lynn,” she said. “She’s so sorry she couldn’t be here tonight. She’s a little under the weather. I saw her earlier today, and she was so excited about this award.”

In true Loretta fashion, she offered Spacek one of her elegant and signature gowns to wear to the celebration.

“That’s the kind of girlfriend she is,” Spacek told the crowd before tearing up speaking of the significance of their bond.

“From the moment we met, she’s been my cheerleader, my sister, my best friend. And it’s still like that almost 40 years later. It’s my honor to accept her award. Well done, Loretta. Well done.

“I think Loretta said it best,” she added, “‘It’s about dad-gum time we recognize women.'”

There wasn’t a dry eye in the entire place after Spacek spoke of the trail-blazing country legend.

We’re so excited for Loretta Lynn. It’s a well-deserved award and we congratulate her! Watch Spacek’s speech in the video below.