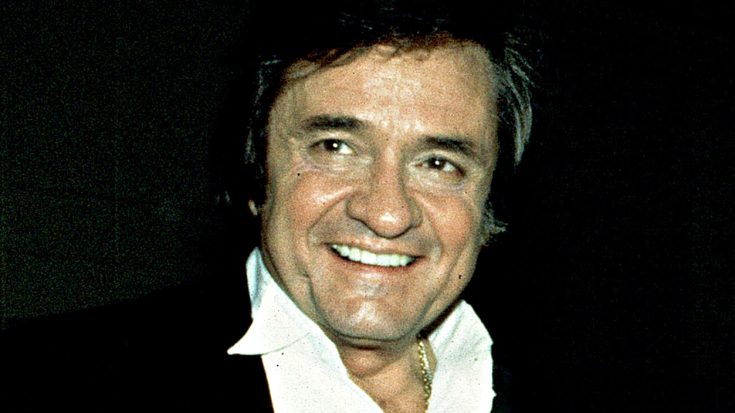 There are few people in the world who are as iconic as Johnny Cash.

Not only is he is one of the best-selling musicians of all time, he is also in several of the most famous photos in music history.

Elvis Presley, Jerry Lee Lewis, Carl Perkins, and Johnny Cash took part in an impromptu jam session at Sun Records on December 4, 1956. Perkins was in the studio  to record new music, while an unknown Lewis was brought in by Sun Records owner Sam Phillips to play piano for Perkins’ session. Cash, a Sun Records artist, had stopped by to watch the session and Presley, the most famous of the bunch, had stopped by to visit his former record label.

That jam session was photographed and recorded and has since become one of the most famous moments in rock and roll.

In 1969, Cash played a concert at San Quentin Prison when photographer Jim Marshall asked him to express his feelings toward the prison authorities.

Marshall requested, “John, let’s do a shot for the warden.”

Cash angrily flipped the camera the bird, and it became one of the most famous photos of its time. Marshall has gone on to claim that the photo was “probably the most ripped off photograph in the history of the world.”

Cake In The Bushes

He is also in one photo that is very famous, but not many people know the origin story. Most are under the impression that The Man In Black was high when this photo was taken, due to a meme that has floated around the Internet for years that says, “You may be high, but you’ll never be Johnny Cash eating cake in a bush high.”

Here is the truth…

The photo was actually taken for the back of his album Strawberry Cake, which was released in 1976. It was a live album recorded at The Palladium in London, England and featured his early songs “Big River,” “Rock Island Line,” and “I Still Miss Someone,” plus brand-new songs like “Navajo” and “Strawberry Cake.”

A note from him told the story about the song “Strawberry Cake,” which read:

“On a hot summer afternoon in New York City, June and I walked through the zoo in Central Park. It was a hot dog and ice cream day. The place was crowed and giving up on the Hassle of working our way through the crowd, we headed back to the hotel to get ready for the concert that night at the Garden State Art Center. As we approached the hotel, I saw a bum lying on the sidewalk in front of the hotel. He never even opened his eyes when I stood over him, June said, “Come On Honey” But I said “just a minute” I walked around him, hoping he wasn’t dead. My shadow fell across him and when I moved on, I saw his eyes flutter as the bright sunlight hit his face. He didn’t open his eyes, but I knew he wasn’t dead. “What are you doing?” June asked “I’m thinking about my friend here, “I said” “that could be me, you know” June came over closer and smiled at me. “That was you a couple of times.” Then she said again, “Come on lets go” The rest of the story is in the song. I became that man. I put myself in his place and my mind, he finally won. I wish I knew who he is, and where he is. I’d send him a piece of Strawberry Cake.”

You can see the two photos used for the album, and the note below.

The back of Johnny Cash's record, "Strawberry Cake" pic.twitter.com/Lu8pRSa9Ls

Cash appeared on the Dinah Shore Show in 1975, just a few months after he wrote the song “Strawberry Cake” and told her the story of why he wrote it. With the help of his lovely wife June, he performed it for her right on the spot.

Watch him explain and perform “Strawberry Cake” below.