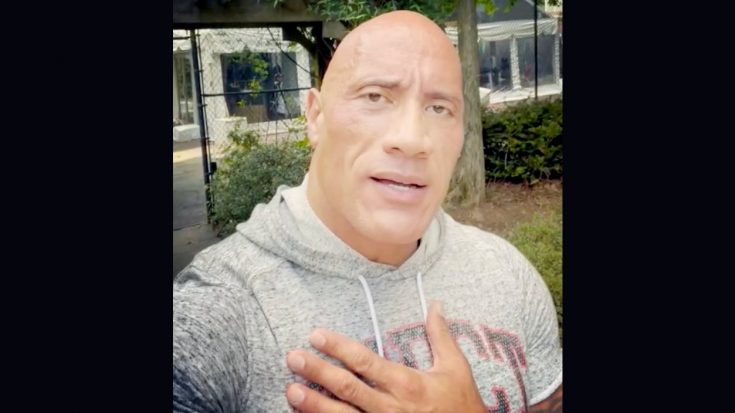 Dwayne “The Rock” Johnson is known mostly as a wrestler and actor. But he’s also a singer…and a huge country music fan at that!

There are videos out there of “The Rock” singing songs by Loretta Lynn and Elvis Presley. One time, he even sang a Sammy Kershaw and Lorrie Morgan duet with his wife!

“The Rock” loves country music so much, he told Kelly Clarkson he once had dreams of becoming a country singer.

This love of country music has allowed “The Rock” to form a solid friendship with one of the genre’s biggest stars…Garth Brooks. So when “The Rock” learned about one of his and Brooks’ fans who is currently battling Stage 4 breast cancer, he knew exactly what to do.

“The Rock” took to social media to share a video for this special fan, whose name is Missy. In the video he said:

“I’m so excited right now to deliver this very special message. I’m so excited my cheeks are red.” He went on to speak about how Missy has been fighting her cancer battle for six years, and encouraged her to stay strong.

“I also know you’re Garth Brooks’ biggest fan,” he continued. “You know I love my country music. So in the spirit of Garth, this one’s for you.”

“The Rock” then proceeded to try and sing Brooks’ “Much Too Young (To Feel This Damn Old),” but his voice unfortunately kept cracking!

“…I apologize about my singing in keys that don’t exist and sounding like I’m experiencing puberty again,” he said in the video’s caption.

“The Rock” said since he failed to do the song justice, he’d let Brooks sing for her instead. Brooks saw the video, and commented to say he’d be happy to pick up the song where “The Rock” left off:

“@therock thank you for tagging me in on this, I will definitely pick up the song for you here. @missy.madden stay strong, we ALL LOVE YOU!!! I’m getting on our rehearsal stage tonight and this will be the first thing I do, sing this song for YOU! LOVE YOU!!!!” he said.

It’s so cool to see two icons coming together to make one person smile. Hats off to them!

The above video doesn’t do justice to how well “The Rock” can actually sing. Watch the below video of him recording the song “You’re Welcome” for the Disney movie Moana to hear how good his voice is!