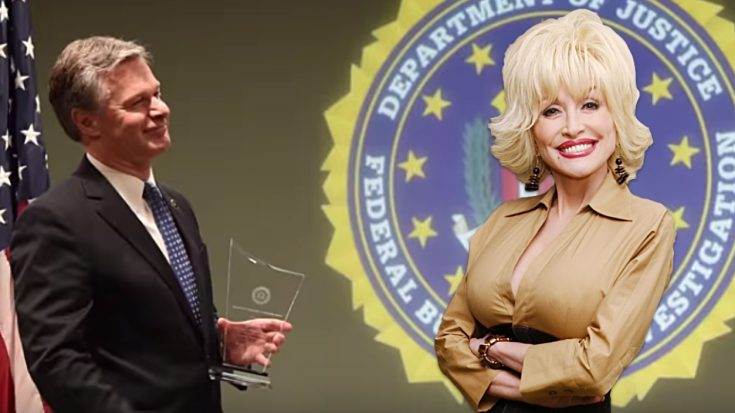 One of the biggest names in country music is being honored by our nation’s top law enforcement agency in a way nobody expected – and we couldn’t be more proud of her!

Dolly Parton, who is a Tennessee native and has always been dedicated to her home state. Her love for her fellow Tennesseeans knows no bounds and she showed this deep caring after tragedy struck Gatlinburg and Sevier County in 2016.

In the 80s, Dolly Parton opened her namesake theme park in the heart of Pigeon Forge and has brought a seemingly endless number of jobs and economic resources, improvements, and family fun to the folks in Tennessee. In fact, Dollywood employs more than 3,000 people every year – and is always expanding.

So, when devastating wildfires swept across Sevier County and caused immense destruction, death, and loss of resources – Dolly Parton knew she had to do something.

The fires, which were said to have been caused by two teens throwing matches into the forest, raged for more than a week and caused the deaths of 14 people, destroyed more than 2,400 buildings, and became the state’s deadliest wildfire in more than a century.

In the weeks and months following the devastating wildfires, Dolly Parton went above and beyond to help those affected by the tragedy – and this caught the attention of the FBI. Parton used her own foundation to help raise money through a variety of ways – including a telethon.

“After the Gatlinburg wildfires, Sevier County native Dolly Parton decided to help her hometown neighbors who had lost everything,” the FBI explained on their official website. “Parton and the Dollywood Foundation provided $10,000 to each of 900 families. The donations brought renewed hope to a community devastated by the worst natural disaster in Tennessee history.”

Because of this incredible generosity, kindness, assistance, and simply love – her actions put her into the pool of nominees for the FBI’s 2018 Director’s Community Leadership Award.

Named as a recipient of the award in the ceremony on May 3rd, 2019 at FBI Headquarters in Washington D.C., Dolly Parton was incredibly honored to be considered for this great honor and issued a heartfelt address in the wake of the announcement.

“It is an honor for me to be recognized by the FBI because there’s no higher calling than your mission to protect and serve us,” she said in a taped segment.

While Parton herself couldn’t be on hand to accept the award in person, the CEO of the Dollywood Foundation, David Dotson, accepted the award on her behalf.

In a 2017 essay to CNN, Parton spoke of the work she did for the wildfire victims, saying: “I’m as proud of being part of this, helping my people, as anything I’ve ever done in my life…And our next step is to continue to look at what’s ahead for everyone and our long-term recovery here.”

Including Dolly Parton, there was a total of 58 awards presented during the ceremony. We are so proud of her and the amazing example she sets for everyone through her incredible philanthropy.

Watch Dolly’s full address in response to the honor below.