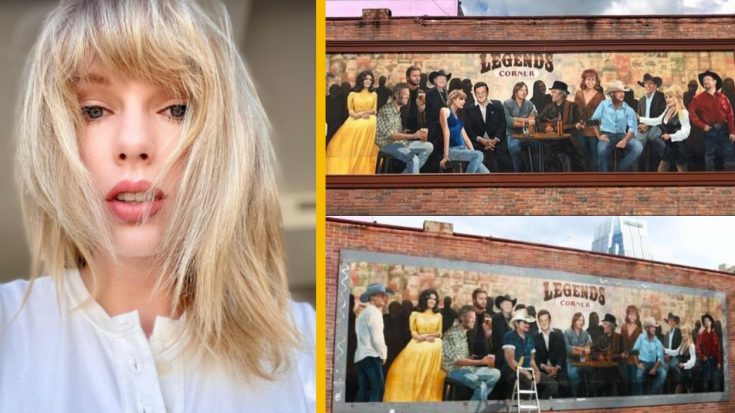 One of downtown Nashville’s most treasured murals of iconic country artists recently received a makeover, and one of the previous artists did not make the final cut.

Formerly, a painted tribute of Taylor Swift sat perched on a barstool between Johnny Cash and Willie Nelson; however, the updated version removed Swift from the picture altogether. In Swift’s place sits Brad Paisley in a blue shirt and cowboy hat.

Naturally, fans of the mural have voiced mixed reactions. While Swift has spent recent years creating music outside of the country music genre, she also broke records as a country artist. Swift even took home the Country Music Association’s highly regarded Entertainer of the Year title in 2009 and 2011. The artist also became the first woman to receive the Pinnacle Award at the CMA Awards in 2013.

Advocates for the change argue that the change occurred partly due to the disapproval of country music fans who frequent downtown. According to The Boot, Tim Davis, who is leading the mural’s update, stated:

“I have heard many complaints here in Nashville about Taylor being on the wall with country legends since she is currently focused mainly on pop. Some inebriated bar-hoppers have spit on her image specifically, feeling betrayed by her venture from country. I guess this is to be expected, but by large, the people of Nashville love her, as do I.”

Davis explained that the building owner decided to remove Swift from the mural, which now only features three women of country music. Dolly Parton, Reba McEntire, and Loretta Lynn are currently the only women to make the mural’s cut.

You can see the mural’s changes below.

Rumor has it, Davis will add three more country stars to the iconic mural. Which artists would you like to see added to the painting?