You Don’t Want To Miss This Surprise Hank Jr. And Brad Paisley Delivered 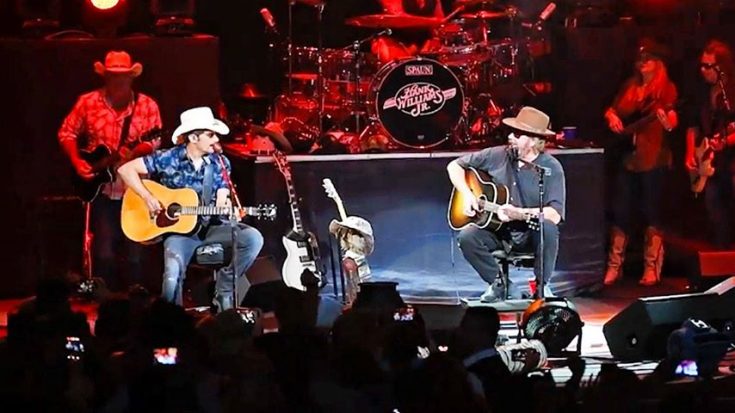 It was just another concert featuring two great country stars at the Blossom Music Center in Cuyahoga Falls, OH.

Then, it happened. The two stars collided and put on one helluva show. Legend Hank Williams, Jr.  warmed up the sold-out crowd for country star Brad Paisley. As the audience hoped, Williams decided to share the stage and call Paisley to join him.

The dynamic duo teamed up for a rowdy rendition of a previous recorded performance, “I’m Gonna Get Drunk and Play Hank Williams.”

The two super talents obviously share a mutual admiration as Williams referred to Paisley as “my TRUE friend” when introducing him on stage. Paisley, in kind, called Williams “The Legend.” Chances are, both were correct in their name calling.

The crowd loved every minute of the hoped-for collaboration. The stage burned brightly as Hank Jr. and Brad took turns handling verses and doing what every country musician loves to do, have fun in front of a roaring sea of fans.

These two megastars previously recorded this very same tune in 2012 on Williams’ album, Old School New Rules, on which Paisley pitched in as a guest vocalist.

Maybe history will repeat itself. Bocephus and Brad has a nice ring to it.

What do you think of this country combination? Is there a particular song you’d love to hear them pair up for next?

While you’re thinking, here’s dessert. We’ve got Brad and Hank Jr. on stage having fun with “I’m Still A Guy” way back in 2010. Enjoy!