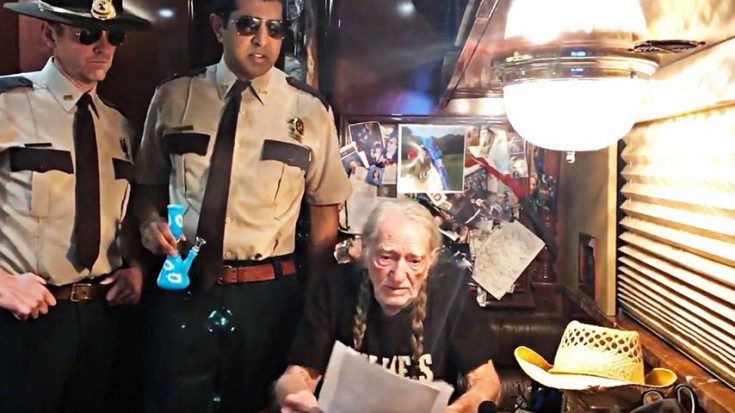 In a ransom video filmed for 4/20, the stars of Super Troopers held Willie Nelson hostage on his own tour bus and threatened physical damage to one of his most prized possessions if he refused to comply with their demands.

Nelson, known as the only guy able to out-smoke Snoop Dogg, has enjoyed a long relationship with weed. Was it any wonder, the Super Troopers would seize his treasured smoking accessory to coerce him into plugging their production?

Willie took to the screen to plead with the audience to get off their “stoned asses” and hit the theaters that weekend to see the captors’ new movie, Super Troopers 2.

Much to the dismay of their hostage, Nelson, even after he met the initial demand of the Super Troopers, he was forced to perform one more act before they say they’ll release him and his tokin’ toy.

After 17 years and a sizable (as in huge) crowd-funding campaign, the sequel to the humorous cult flick, Super Troopers, hit the theaters on a day that resonates with its highest number of supporters. That date of course is 4/20, “weed day.”

The nonsensical sequel continues to play off the misbehavior of the khaki-uniformed, heavily mustachioed officers-of-the-law who love playing jokes on one another. The uniformed officers, in real life, are none other than the Broken Lizard comedy group. They’re simply taking their laughs to the big screen.

For anyone familiar with Willie’s favorite past time, you’ll know he was the perfect candidate in the perfect location for this promo and one who would do anything to save his favorite bong from destruction.

Really, that’s stooping pretty low. Can’t a man smoke in peace? Though short, the ransom video get the desired message across to viewers. See the movie…or else.

What do you think of the video? Do you plan on seeing Super Troopers 2?