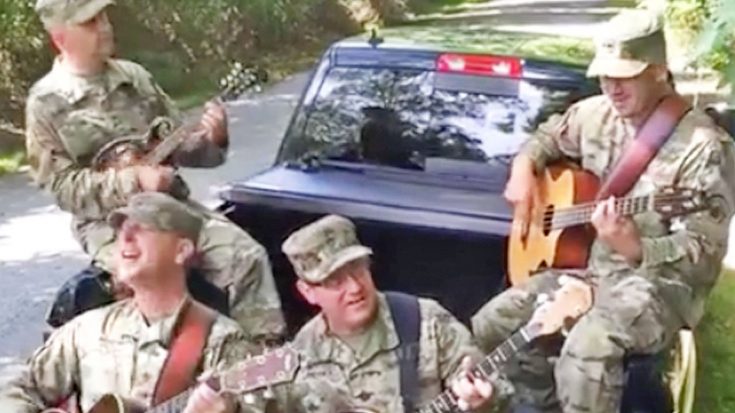 Since the release of the star-studded video for “Forever Country,” the internet as exploded with covers of the country medley’s base-song “Take Me Home, Country Roads.” Amongst the thousands of covers of John Denver‘s classic, one definitely shines through. The U.S. Army Field Band, Six-String Soldiers, was early to the game posting their rendition of the famed classic back in August just about breaking the internet as a result.

“Morning everybody!” announced guitarist Staff Sergeant John Brandon Boron. “We thought we would come out on our coffee break this morning and play one of the requests we had last week…Hope you enjoy it and have a great day!”

The Six-String Soldiers is a band that performs in a variety of genres including folk, bluegrass, and Irish music. They find time in between their busy schedules to perform in casual settings and venues ranging from intimate stages to music festivals across the United States. The band focuses on audience interaction aiming to shares their stories and experiences as soldiers in the U.S. Army through music.

The band was formed in February 2015 and has accumulated over 470,000 likes on Facebook. The group has since been awarded the “Army Community Relations Award of Excellence” as well as a “Certification of Appreciation.”

Watch their rendition of “Take Me Home, Country Roads” in the video below and be sure to let us know what you think in the comments!