Singer Can’t Speak English, But Knows Every Word Of ‘Amarillo By Morning’ 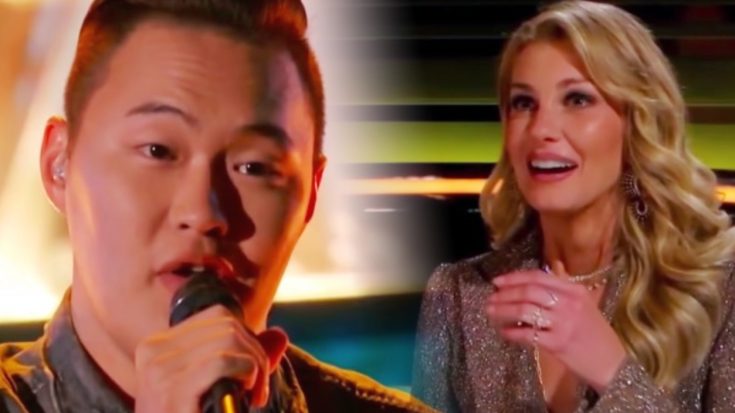 In the winter of 2019, a new competition series debuted, and country fans found a familiar face on its panel of judges.

The show was called World’s Best, and country superstar Faith Hill served as a judge alongside actress Drew Barrymore and drag queen RuPaul.

Had a blast working with James, Ru & Drew. Can’t wait for you all to see #WorldsBest tonight!

The purpose of the show is to display the talents of incredible people from around the world. In just its first episode, the show featured performances from a one-armed violinist, a taekwondo group, and a sword swallower.

But it was a singer named Enkh Erdene who perhaps captured the most attention because of a jaw-dropping performance of a country music classic.

If you follow talent shows around the world, you’ve likely seen Erdene before. He competed on and won the 2016 season of Mongolia’s Got Talent with his smooth performances of various country classics.

But if it hadn’t been for one George Strait song, Erdene’s journey would not have been possible.

The song we’re talking about is “Amarillo by Morning,” which Strait released as a single in 1983. While it didn’t go on to become one of his many number one hits, the song is still regarded as one of his signatures.

Erdene performed “Amarillo by Morning” for his audition on Mongolia’s Got Talent, and won the judges over with that performance. So it only made sense for him to revisit the song when he came to the U.S. for his debut appearance on World’s Best.

Prior to singing, Erdene made a confession that would put his performance under a whole new lens. It turns out that he doesn’t speak or understand a word of English, even though many of the songs he performs are country songs from the U.S.

So you can imagine how stunned Hill and the other judges were when he started singing and sounded like he was straight out of Texas!

What Faith Had To Say…

As Erdene sang, the judges and the 50 global talent experts (who also have voting power in who stays and who goes) were left open-mouthed in amazement. No one could believe that the young man from Mongolia, who doesn’t speak a word of English, was able to sing a country song so convincingly.

By the time Erdene finished performing, every person was on their feet, awarding him with a well-deserved standing ovation.

Everyone was surely curious to hear what Hill had to say, since she was the only country music artist in the room.

She had nothing but praise for the man people are now calling the “Mongolian Cowboy,” telling him, “I’m really speechless. You picked one of the most classic country songs by one of the greatest country singers of our lifetime, and you blew me away.”

Erdene is sure to blow you away as well when you check out his performance below! That voice is something else!