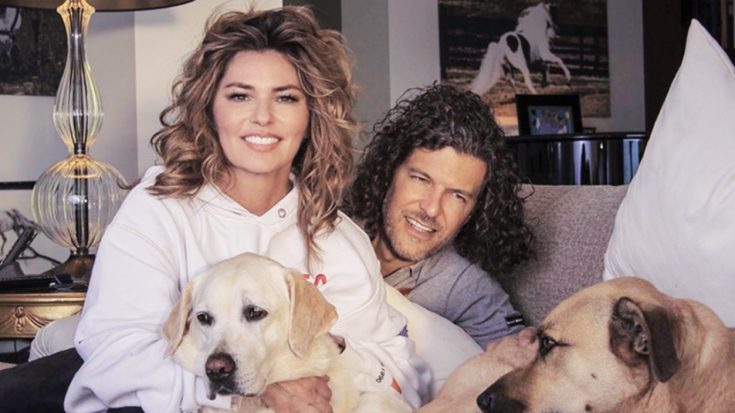 Their love came to be because of their mutual heartbreak, but sometimes you find true love when you least expect it. Twain was married to Robert “Mutt” Lange in 1993, but in 2008, she found out he was allegedly having an affair with her good friend, Marie-Anne Thiébaud. It was actually Frédéric, Marie-Anne’s then-husband, who informed the singer of the affair.

“I didn’t want to love again-it was the last thing on my mind,” Twain told PEOPLE in 2011. “It’s just amazing how life works.”

The two split their time between his native Switzerland and their home in the Bahamas. But soon, they’ll call Las Vegas “home,” seeing as Twain begins her Las Vegas residency this week!

It’s a rare sight to see Twain share a photo with her husband, so when she does, it’s very sweet. In fact, the last time she did was back in March when they went to see Gwen Stefani’s Vegas show and met her backstage.

So glad we got to see you @gwenstefani!! Such a great show! ?

Even ET Canada called their appearance together at the 2019 American Music Awards “rare.”

ICYMI: #ShaniaTwain is all smiles as she makes a rare appearance with her husband Frédéric Thiébaud at the 2019 #AMAs. Check out more of the couples who attended last night's ceremony —https://t.co/QMZX5AYEhf pic.twitter.com/xkTYzw92rE

On Wednesday (Dec. 4), she shared a photo of her, Frédéric, and their two dogs from an in-home interview they did with L’illustré, a Swiss magazine.

If you are seeing her residency in Vegas, keep your eyes peeled. You might just see Frédéric in the VIP section!

See the sweet photo below.