Shania Twain Says Being With Son Eja Was “Very, Very Helpful” During Divorce 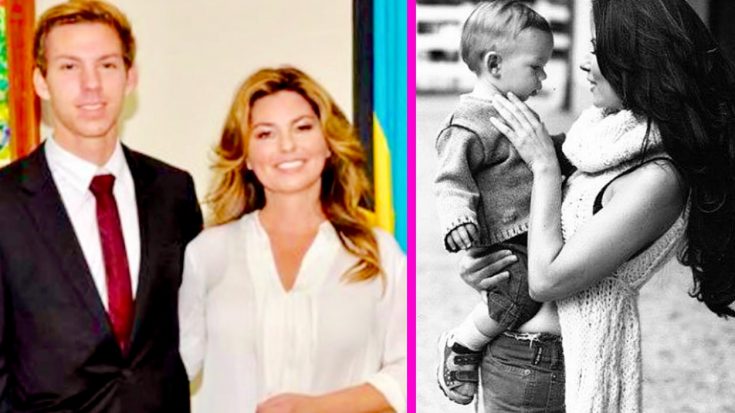 In May 2008, Shania Twain announced her separation from her husband of 15 years, producer Robert John “Mutt” Lange. Infidelity was cited as the reason for the separation, as Mutt was accused of having an affair with Shania’s best friend and personal assistant, Marie-Ann Thiébaud.

Shania and Mutt’s divorce was finalized over two years later, on June 9, 2010.

Despite the heartbreak she endured, Shania went on to find new love. And she found that love with Frédéric Thiébaud, the husband of Mutt’s alleged mistress.

Shania said she and Frédéric confided in one another about their shared heartbreaks and eventually fell for each other. Speaking to People in 2011, she said she never planned to find love again after her divorce.

“I didn’t want to love again-it was the last thing on my mind,” Shania said. “It’s just amazing how life works.”

Shania and Frédéric married on January 1, 2011.

In addition to Frédéric, Shania had someone else to help her cope with her split from Mutt. That someone was her son, Eja.

Shania and Mutt welcomed Eja in August 2001. Despite her superstar status, Shania managed to keep Eja out of the spotlight throughout his childhood.

But now that Eja is grown, we’ve heard a little more about the young man and his interests. Speaking to Entertainment Tonight in December 2019, Shania said Eja has a passion for music as well, but not in the same way she does:

“He’s very passionate about making music, creating music, composing music,” she said. “He doesn’t have this desire to be on stage. I’m not sure if he would ever go in that direction. He’s following more in the footsteps of creating the music. He loves to orchestrate music. I’m very happy for him.”

It’s clear that Shania is extremely proud of her son. He has always been the center of her world, but he was especially important to her when she was going through her divorce from his father.

During a visit on The Kelly Clarkson Show, Shania explained how Eja helped keep her focused throughout the divorce process so she didn’t just sit around and let sadness consume her:

“You’re just not always so self-focused…you’re like, ‘No, I’m a mom, and I’m gonna…I’m gonna do my best, I’m committed to this. And that is a very healthy…I don’t want to say distraction, but preoccupation that you love and enjoy,” she said.

Shania went on to say that being with Eja made her redirect her feelings so she wasn’t 100% focused on the divorce every second of the day.

Eja was only six years old when Shania and Mutt separated, so he still needed a lot of his mother’s attention. “It just wasn’t always about me all the time, and that was very, very helpful,” she said.

You can see Shania’s emotional interview about how Eja helped her through her divorce by tuning in to the video below.

We’re so glad that Shania is in a happier place now, surrounded by love from both Frédéric and Eja!