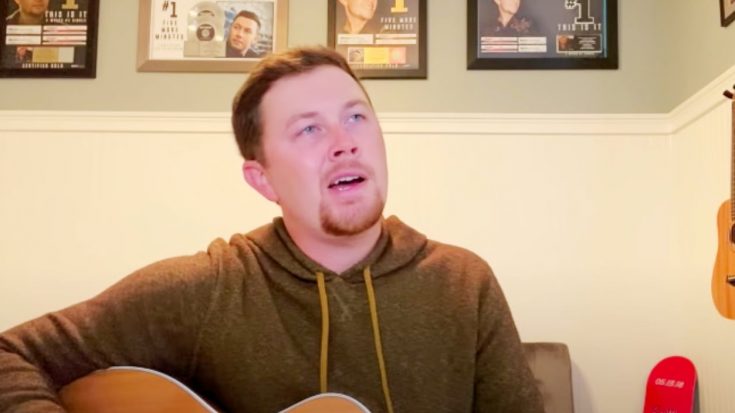 Due to everything going on, the 2020 CMA Fest was canceled. But the CMA still found a way to entertain fans with quality country music that summer.

Instead of hosting its live festival in Nashville, the CMA had a virtual “festival” called CMA Summer Stay-Cay. Country fans were able to watch their favorite artists perform during a livestream on the CMA’s official YouTube channel.

In addition to singing their own hits and singles, the artists who participated in CMA Summer Stay-Cay also paid tribute to 90s country. Russell Dickerson, Carly Pearce, and Dustin Lynch even competed in a 90s country cover challenge!

The odes to 90s country kept coming throughout the night, and Scotty McCreery delivered one of them.

Hot off the heels of his single “In Between” hitting #1, McCreery hopped on CMA Summer Stay-Cay to sing one of the most iconic country songs to come out of the 90s. He chose Deana Carter‘s “Strawberry Wine,” which was released in 1996.

“Strawberry Wine” was Carter’s debut single. It went on to top the Hot Country Songs chart and also crossed over to claim the 65th position on the all-genre Billboard Hot 100 chart.

The song is told from the perspective of a woman looking back on her youth and how she lost her “innocence” during the summer she was 17. It’s not a song that is often performed by male artists, so it was interesting to hear McCreery shift the perspective with his acoustic performance.

Before he started, McCreery spoke about how much he enjoys “Strawberry Wine,” saying, “...I get the pleasure of singing one of my favorites. A song that was one of the biggest in 90s history, country music history…”

McCreery’s respect for “Strawberry Wine” shows in his performance of the song. Tune in to the clip below to hear him sing it.

It’s no wonder why McCreery won American Idol way back in 2011. He can take any song and make it sound good!