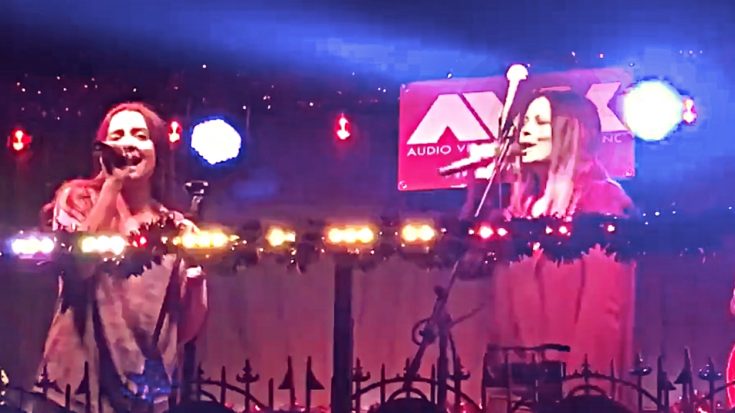 Sara Evans was recently joined by her children on stage to cover a Chris Stapleton song that was originally sung by David Allen Coe and George Jones – folks, it doesn’t get more country than that!

Most new generation country fans know “Tennesse Whiskey” as Chris Stapleton’s song. What most don’t know is that the song has a long, star-studded history. Originally recorded by country music legend, David Allen Coe in 1981 – the song didn’t gain widespread popularity until 1983 when the Possum himself recorded the tune.

Decades passed and it was time for the song to be revisited by the next generation. During the 2015 CMA Awards, Chris Stapleton recruited southern-born pop-sensation, Justin Timberlake to sing the timeless tune with him. Stapleton breathed new life into the classic hit and preserved it for the next generation to enjoy.

In the late 90s and early 2000s – female country artists were on the rise. One of the trail-blazing gals was Boonville born, Sara Evans. The Missouri native rose to fame after growing up on a farm with 6 brothers and sisters. When she dropped her debut album, Three Chords and the Truth – the world instantly fell in love with her.

Coming from a family of six- it is no wonder Evans decided she wanted a big family of her own.

We're all ready for the 4th of July with these cute @oldnavy flag tees. Even Roman & Gypsy got into the spirit! #oldnavystyle #sponsored

A rare occasion to be dressed up with my children! Such a fun evening! #familyiseverything @arealfineplace

She married talk show host, Jay Barker in 2008 and took on his four children Andrew, Braxton, Sarah Ashlee, and Harrison as her own. She added her own kids, daughters Audrey and Olivia and son Avery to the mix and hopes they will follow in her musical footsteps.

She told People that “I think it would make me nervous if they didn’t want to do something weird with their lives. If they just wanted to be normal I would be like, ‘What? I’m not going to be able to relate to you!”

Well, this musical mommy might just be in luck…

Talent Runs In The Family

Sara has definitely made her name in the country music world – and it looks like her kids might do the same!

During a neighborhood Halloween Party, Olivia and Avery joined Sara onstage to perform a bluesy, rock-centered version of Chris Stapleton’s “Tennessee Whiskey.” The family captivated the audience with a mesmerizing performance that you too can enjoy in the video below!

Another great year at the neighborhood Halloween Party and so awesome watching Sara and our kids,Olivia and Avery, perform. Also, Sara’s sister (Allyx) as Michael Meyers on guitar. Thanks to @avxinc_ , Shea Brother’s and the Flakes. pic.twitter.com/uMgVC8Urp9