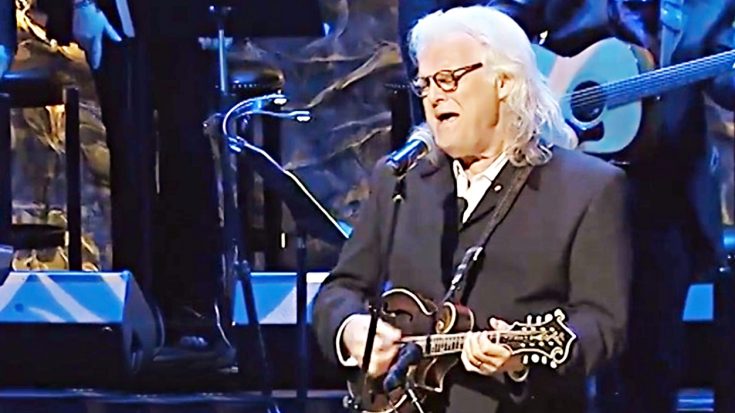 Ricky Skaggs has been pickin’ instruments since he was a little boy. At the age of 64 years old, he was given the highest honor in country music and was inducted into the Hall of Fame. But there was something very special about his induction. A piece of history came out for one more very special performance and it shook Skaggs to the core.

Born in Cordell, Kentucky in 1954, Skaggs grew up with music legends surrounding him. He played with Flatt & Scruggs, Emmylou Harris and later became friends with Keith Whitley. Surrounded by such talent it was no wonder he was as gifted as he was. But there was one artist who gave him something money could never buy – his very own mandolin and a chance to play for the world.

That artist was none other than The Father of Bluegrass, Bill Monroe. He gave young Skaggs a mandolin to play and the two remained friends for years to come. They played together years later and Skaggs’ respect for the legend never waivered. So when it came time to unveil Bill Monroe’s statue honoring him at Nashville’s Ryman Auditorium – Skaggs was the man to do it.

Then, only a year later it was announced that Skaggs would be inducted into the Country Music Hall of Fame. He knew he was going to play a song or two but he had no idea that the museum had something very special lined up for him.

As a humble Skaggs stood on stage, the announcer told him, “Ricky, you’re the embodiment of country’s unbroken circle. You have carried forward the music that was passed down to you and you have honored those who have placed faith in you. When you were six years old, Bill Monroe placed his mandolin in your hands. The mandolin was made by Llyod Lore and signed by him on July 9, 1923 – four years before Jimmie Rogers and the Carter Family were discovered at the Bristol session.”

Bill Monroe's Gibson F-5 Master Model is probably the most famous mandolin ever made in American music history. Plan a trip to the Museum to learn more about this precious jewel. #PressPlayRecord pic.twitter.com/uNtSH4NPaH

As the announcer continues speaking, a man wearing white gloves brings the same mandolin on stage and Skaggs is noticeably taken back. This piece of history was not just part of a museum – it was part of him. He takes his time, looking over every inch of the instrument, in shock that he was once again holding the mandolin that started him on his journey to an almost 60-year career.

The announcer continued, “It was scratched and scared, its soul is boundless. It was once destroyed, smashed into a hundred and fifty pieces, but Charlie Darrington at Gibson pieced it back together – resurrecting it.” As Skaggs held the instrument close to his heart, the announcer asks him to play it saying, “Mr. Monroe would want to hear it ring out tonight as his musical son receives country music’s highest honor. Take it, make it sing.”

With not a dry eye in the audience, Skaggs turns to the stage and after another moment of sheer disbelief looking at the instrument – he begins picking away at the strings.

The crowd was singing and swaying along to the timeless tune that continues to ring true today. They were in for another treat when a man in all black appears on stage and it is none other than Garth Brooks!

Brooks tells Skaggs to play a double solo, giving the legend his moment in the spotlight. With a huge smile on his face, Skaggs says “I’ll play this thing anytime.”  When Brooks joins in on the song, the crowd whistles, and claps.

Their heartwarming performance proves that the circle remains unbroken as yet another generation continues to pass down the music given to them.

You can watch the video of them singing and playing the mandolin below.