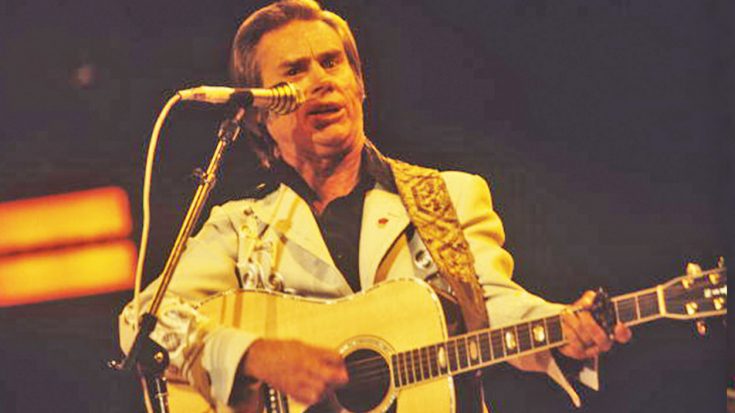 While it’s no secret people have been doing impersonations of Elvis Presley‘s iconic voice for decades, not many know that country music legend George Jones once took a crack at one of The King’s hit singles.

Under the pseudonym Hank Smith, Jones delivered his best impersonation of The King of Rock and Roll with a spot-on rendition of “Heartbreak Hotel.”

“Heartbreak Hotel” was recorded by Presley back in early 1956.  After he was shown the demo by songwriter Mae Boren Axton at a country music convention in Nashville, the rest was history. The song was a smash hit for Presley, topping Billboard’s all-genre Hot 100 chart for seven weeks. In addition to becoming Presley’s first-ever single to sell over a million copies, “Heartbreak Hotel” was later inducted into the Grammy Hall of Fame.

“Heartbreak Hotel” left such a legacy on the music industry that every generation to come after Presley still continues to live it out. Not stopping there, artists from other genres have even found fascination in the song to take on their own renditions, including Lynyrd Skynyrd and Guns N’ Roses.

As Jones gets into his Hank Smith persona to do this rendition, he perfects it. His vocals are so eerily similar to Presley’s, you might just second guess your hearing for a second.

As far as Presley impersonations go, Jones isn’t the only singer to ever take on the role of Hank Smith. Fellow country singers Al Bernard and Leon Payne also took the pseudonym on for a multitude of releases.

On this date in 1956, Elvis Presley's "Heartbreak Hotel" goes to number one on the charts. Did you know that a suicide…

You can hear Jones’ rendition of “Heartbreak Hotel” below.