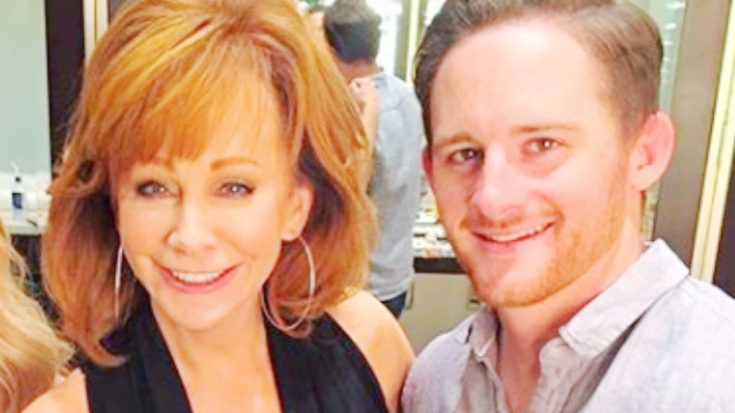 On February 23, 1990, Reba McEntire gave birth to her first and only child, a son named Shelby Steven McEntire Blackstock.

From that day forward, Shelby was the light of his mama’s life.

Happy Mother’s Day to the best Mom a son could ever have! Love you very much!! . . . @reba #happymothersday #bestmomever #mom #momday

Now 28 years old, Shelby has a busy career of his own as a successful race car driver. Reba is occasionally able to come to his races, though it’s always nerve-wracking for her to watch.

“That first time when that green flag drops, my stomach goes right to my throat, and then it goes back down and then I’m OK,” Reba said in a 2011 interview with The Boot. “But, boy, that roar is tremendous.”

congratulations Shelby! So proud for you. Repost @shelbyblackstock with @get_repost ・・・ So many things going against us this weekend, no testing, haven’t driven since September, but @teampelfrey_il and I were able to get on the podium and come out 3rd in the championship! Huge thanks to #Pelfrey @buygapguard and all my supporters for this weekend! ?3️⃣? ?IMSP . . . #mrti #teamcoopertire #gpstpete #racing #racecar #podium #p2 #motorsportphotography #teamwork #arai #sparco #ampedlife #amped #stpetersburg #florida #?

It’s clear that no matter how old he gets, Shelby will always be Reba’s baby boy. But over the past year, there’s been a new “baby” in her life, and he just so happens to be her “grandson,” Watson.

Alright, so Reba’s grandson may have four legs and be covered in fur, but she still loves him to pieces!

Happy birthday @shelbyblackstock I hope you and Watson have a wonderful day today. Love you very much! Grandma said she loves you too.

Watson is a Pembroke Welsh Corgi that Shelby shares with his girlfriend, Marissa Branch. The first photo he shared of the fluffy little fella also shows Watson enjoying his first snow.

Just look at that little tongue!

His First Meeting With Grandma Was Precious

Even though Watson was born in November, Reba didn’t get the chance to meet her “grandson” until months later. But once she did, it was a happy day for her, Shelby, and Watson!

Reba shared a photo from their first meeting, writing, “My grandson, Watson, was a very good puppy yesterday during breakfast and my visit with Shelby.” She also used several hashtags in her post, including #grandma and #toocutetobelegal.

My grandson, Watson, was a very good puppy yesterday during breakfast and my visit with Shelby. #toocutetobelegal @shelbyblackstock #roadtrip #grandma #watson

Since then, we’ve had the chance to watch Watson grow up right before our eyes, as Shelby frequently shares photos of his cute pup.

One of our personal favorite photos comes from July, when Watson was a little older. The cute little guy got all dressed up with a dapper bowtie, and Shelby couldn’t help but snap his picture.

Fast forward to Thursday (November 8), and Watson was already celebrating his first birthday! Shelby put up a sweet slideshow of photos in honor of his little guy, starting with one of Watson in front of his special doggie birthday cake.

“He doesn’t look happy in this picture because he’s the most food driven dog I have ever met…and sitting good with food in front of him. Is. The. Worst. Torture! Lol.” Shelby wrote.

Look at that face!

Today is Watson’s 1st birthday! He doesn’t look happy in this picture because he’s the most food driven dog I have ever met…and sitting good with food in front of him. Is. The. Worst. Torture! Lol. But it’s been an amazing year training him and seeing him learn & adapt. It’s going to be a fun future with him, especially being home and working with him at the property. We love you very much big boy! #watsyboy . . . . #corgi #corgibutt #corgilife #corgibirthday #birthdaypup #corgipuper #corgiofinstagram #watsonthecorgi #corgilove #goodboy #bestboy #bestfriend #oneyearold #family

Happy birthday Watson! We look forward to watching him grow and learn even more in the years to come.

Now if only he would pose for more photos with his grandma Reba…that would be the real icing on the cake!

Watch the video below to learn more about Shelby, his racing career, and what Reba thinks about all of that!