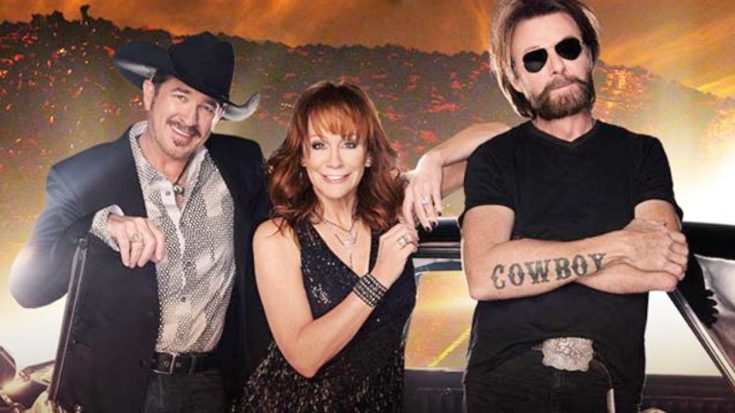 Fans Flock To Vegas To See Trio Of Country Stars

In 2015, Brooks & Dunn came out of retirement to join their good friend Reba McEntire for what they likely thought would be a limited-run residency at Caesar’s Palace in Las Vegas. The hit country duo had never intended to reunite, but they couldn’t pass up on the opportunity to sing in Vegas with McEntire:

“After some time apart when Caesars came to us asking if we would like to do the residency, and especially with our dear friend and big sister Reba, we were like, ‘You know what? It would be fun to sing these songs again.” Kix Brooks said in an interview with Music Row.

Called Reba, Brooks & Dunn: Together in Vegas, the residency started in June 2015.

JUST ANNOUNCED: Brooks & Dunn will reunite with Reba McEntire for a Las Vegas residency at The Colosseum at Caesars…

The show featured a mix of performances, with Brooks & Dunn performing some of their hits, McEntire singing some of her own hits, and then the three of them uniting to sing together. Fans fell in love with the show right away, leading to the booking of additional dates in 2015.

As more people learned about the show and flocked to Vegas to see it, it soon became clear that the trio had a good thing going on. More shows were booked for 2016, 2017, 2018, and now they have multiple shows on the books for 2019.

I am ALWAYS excited to see Reba, Brooks and Dunn! Together in Vegas is a great show 🙌

Both McEntire and Brooks & Dunn released new records this year, which will surely drive even more people to their future Vegas shows. McEntire’s album, Stronger Than the Truth, emerged at the fourth spot on the Country Albums chart following its release, while Brooks & Dunn’s album, Reboot, claimed the chart’s top spot.

How Much Longer Will The Residency Last?

While it’s already confirmed that the duo’s residency will at least carry through 2019, fans can’t help but worry about its future. After all, Vegas icons Donny and Marie Osmond just announced they are retiring from their longtime residency, so there is some paranoia that other performers, like McEntire and Brooks & Dunn, will do the same.

Say it ain't so (*looks up flights to Vegas* ). ☹️🕺🏻🎤💃🏻 | Marie Osmond Says She and Donny Osmond Will Likely Retire from Las Vegas This Year. https://t.co/kDyW2snjzz

While speaking to PopCulture.com and other media outlets, McEntire finally spoke to fans’ concerns by revealing the fate of her residency with Brooks & Dunn. Although she has no idea what the future has in store, she is confident that the residency will continue as long as the fans keep loving it:

“We have a great time. It’s the prefect deal. You’re here in Las Vegas, where the shopping, the shows, the restaurants, entertainment, everything is just wonderful. And we have a great time. Our band, our crew, our friends, everybody just loves coming to Vegas and spending the time with us.“

Also, based on a graphic promoting McEntire for Female Vocalist of the Year at the 2018 CMA Awards, it seems that the residency is already set to continue through 2020. That notation appears in the small print to the left of her photo below.

That’s a relief, isn’t it? Hopefully McEntire’s residency with Brooks & Dunn continues for many more years. Especially since it’s one of the few places we get to see Kix and Ronnie sing together like old times!

We have full faith that the fans will keep on coming to the show, since people love the trio’s songs and their funny onstage banter. As McEntire said during her interview, she originally tried to direct the conversations they’d have on stage, but soon realized that Brooks & Dunn were always going to do their own thing.

“They’re gonna say what they want to say and I just kind of follow along,” she said.

We think McEntire and Brooks & Dunn make the perfect team, and the popularity of their Vegas residency proves that. You’ll see what we mean when you tune in to one their performances below.

Have any of y’all ever been to see McEntire and Brooks & Dunn perform together in Vegas? Well if you haven’t, it sounds like you still have lots of time to catch them there!