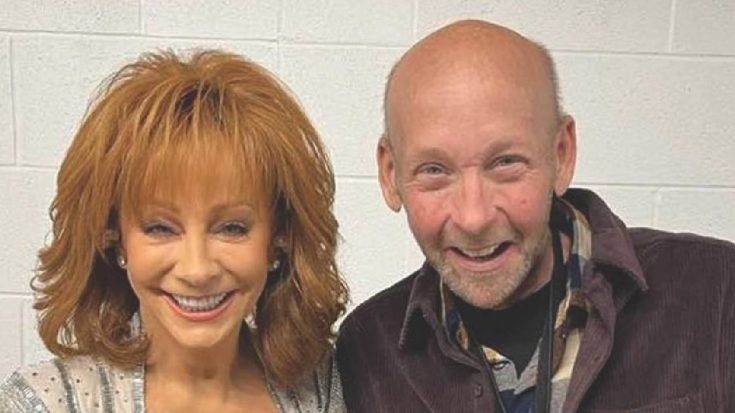 If you saw Reba McEntire on tour back in the 1990s, chances are you also saw a Reba impersonator on stage with her, but didn’t even know it.

McEntire released the song “Fancy” in 1990 and had performed it countless times by the time her 1996 arena tour rolled around. She’d come out onstage with her hair pinned up wearing a large black coat and hat. But at the climax of the song, she’d throw off the hat, take her hair pins out, and rip off the coat, showing off a, well – fancy red dress.

In 1996, she wanted to step it up a notch for her tour, so she enlisted a drag Reba impersonator by the name of Coti Collins, real name: David Lowman.

Coti would appear on stage – but not on camera – and lip sync Reba’s live vocals as she did a quick change into the iconic red dress. Coti would then disappear and a streak of flames would flash down the stage and a red dress wearing-Reba would appear on the complete opposite side of the stage. She’d step on to a lever that would then let her fly over the audience.

Speaking with Oxford American in September 2022, David said, “They never had the camera on me. Reba would be on the other side, at the end of the fire. So it looked like I traveled, Reba traveled, in the red dress, across the stage.”

You can see that reveal in the video below.

“We’ve stayed in contact ever since and I was so saddened to hear about his passing this week,” she wrote. “We recently had the chance to visit for a few moments and I am so glad we did. Rest in peace, David.”

According to his personal Facebook page, he attended her Charleston, West Virginia concert and visited with her and boyfriend Rex Linn on October 20th.

But, he did check-in to the Virginia Cancer Center on Facebook a few times as recent as October 5, 2022 and wrote, “Here we go again.”

Our thoughts and prayers go out to all who knew and loved David.

See Reba’s post below. Make sure to swiper through to see their most recent picture together.